Angus, now, he’s my cousin. Well okay, a cousin of some sort of cousin in Aberdeen, where the Scots side of my family say he was so called because at birth he was the size of a bull of that particular breed of cattle called Aberdeen Angus. And of course he didn’t get any smaller as he grew up, indeed amongst a crowd of normal citizens he stood out as did the lighthouse of Alexandria, a blazing bonfire of red hair towering above the sea of normal heads. His beard was red too, and his skin deep pink, he seemed aflame, so there was no chance of our getting lost on the Drakensberg escarpment when he joined me for a long hard haul up the Langalibalele Pass. Every Hlubi goatherd along the way forgot his flock at the sight of this monstrous fiery figure. 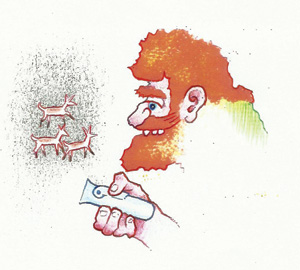 Curiously prancing Hielan’-style in the midday sun, Angus took two of their sticks, see, and crossed them on the ground to do that sword-dancing thing with pointy toes and dangly fingers, whistling the while in the absence of the peeps. He had a sort of instant holiness bestowed upon him by the populace of Hlubi-land, as indeed he had in Aberdeen too, as happens in such superstitious communities, where shamans and red-head loonies are thought to be in touch with their ancestors and the Great Moral Accountant in geostatic orbit. Well all right, I know you can’t be in geostatic orbit except over the equator, but never mind Galileo and that lot, if you’re almighty you can be so wherever you choose, even over the Hlubies. Or Aberdeen.

Be that as it may, for me Angus was important because he taught me a bit of lateral thinking in this life. You know, business, marriage, politics, that sort of thing; but the problem as I saw it was that his thinking was sideways all the time. You could never rely on him to come straight to the point, he would always walk twice at least around it then climb in through a window. New acquaintance often sensed this oblique something in him; some reacted instantly. Like on our way to the Berg we pull in at that Bake ’n Braai place in Scottsville, Pietermaritzburg, for a couple of their special pies for our first night’s supper. All other food is lightweight, dehydrated, dismal, eating is not for pleasure up there, it’s for fuel, and Angus says to the nice plump smiley Zulu baker lady in the bakery Give me a couple of steak pies, please. How many? says she. Two, of course, says he, as in a marriage couple. Yes, says she, but what about the bridesmaids? Well how many do you think we need, then? says Angus. Six, says the plump lady. All right, says he, give me six then. Bloody hell, Angus, say I, what are we going to do with six pies, man, I can’t eat more than one, are you going to eat five? He pats my shoulder. Never to worry, mon, says he, they’ll come in useful, you’ll see.

And sure enough, they do. Up the Berg, the sword-dancing done, we smile all round and sally forth, accompanied by a Hlubi elder who’s about as fit as both of us together, and about mid-afternoon what happens in the Berg happens; a fearsome black blasting thunderstorm roils up along the escarpment with lightning aimed especially at us, it’s so close you can smell the ozone, bitter, like sparks from an electric train. It scares the shit out of us, and this elder says sorry, he must be getting home. But before he departs he hints that he wouldn’t mind a little prezzie if he shows us a nice dry cave. He takes us to what is really a vertical cleft in a mighty great rock, a metre or two wide, where Angus takes out the cardboard box with the pies in it, opens it before the old man. Old man is entirely dumbstruck. I take a pie and start munching, Angus takes one and hands the box to the elder. For you, he says. Elder sniffs the pies and rolls his eyes and sighs, enchanted.  Sleep well, he says, and departs. 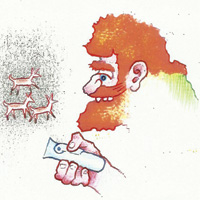 He must j-u-ust have got home when the rain starts. It’s not put through any sieve, this rain, it’s straight from the bucket, and we creep back in the cleft where it’s pretty narrow but quite cosy, really, though dark from the heavy clouds outside. It’s clear we won’t make the top tonight; Angus takes out his little hand-pumped torch to look around for a sleeping place, then suddenly... Hey, look here! he says, and there on the wall are three exquisitely painted little oribi. Dainty, dainty. Fresh fresh, as if painted just yesterday, but right back there we find somebody’s bed of dry grass: old, old, so old it just crumbles away in your fingers if you pick it up.

I reckon, says Angus, one of your Bushies took shelter from the lightning here just as we have done, how long ago? A hundred years? It’s 1980 now, say I, a hundred would do it, they were still around then. So he just happened to have his painting kit along with him, hey, and how better to spend the time when you’re caught in a storm? And apart from the old bloke with the pies, perhaps, do you think we are the first ever to see this painting? says Angus. Probably, say I. Perhaps, rather. Well let’s believe it then, says he, it won’t do any harm to the history of the place. Okay, say I, and we do.

And that’s what I mean by lateral thinking.