UPDATES: The house that fraud built?

The spectacular mansion, at 88 Addison Drive, La Lucia  is the home of Mrs Shauwn Mpisane who is due to go trial in the Durban Regional Court in June, charged with tax fraud.

No surprise here at Noseweek.

In May 2008 the neighburhood was rife with wild speculation about who the new owners might be – they had bought the property for R17 million and then embarked on extensive renovations. The flash house was one thing, the automotive pornography parked in the driveway, another: an Aston Martin DB9 sports car, a Lamborghini Diablo and a Bentley Continental – all in shiny black – and the entire package guarded by men in dark suits, carrying assault rifles.  The registered owner is Wiseman Sibusiso Mpisane,  a constable in the Durban Metro Police, who was recently promoted to sergeant. He has since left SAPS to become a man of leisure. His wife, Shauwn, has the more interesting connections: her brother was a cash-in-transit robber who was shot and killed  by the police more than a decade ago and her mother, Florence Mkhise, is chairperson of the Durban municipality’s housing committee and has a municipal office block named after her. 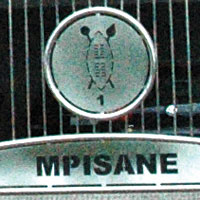 The charges against Shauwn Mpisane relate to alleged fraud involving R2.4m. She owns Zikhulise Cleaning, Maintenance and Transport CC, and is accused inter alia of submitting false invoices to reclaim VAT and of managing a business while disqualified from doing so because of a previous conviction for tax fraud. Her former bookkeeper, Kishal Reddy, has pleaded guilty to similar charges.