Anybody out there not know Salvador Dali, painter, surrealist, exhibitionist, he of the pale face, staring eyes and spiky moustache, who said amongst other spooky stuff he could remember life in the womb, events before birth? Great painting, said the artists of the day, but all b*llsh*t of course! Pshaw! said the psychologists, there aren’t any events to remember before you’re in this world, and these opinions I went along with, generally, being but small and thinking things said by grown-ups must be true. But Life being what it is, it overtook me by middle age, and ere long I had perforce to give credence to the above Salvadorean pre-natal b*llsh*t claim, my pretty wee doe-eyed daughter herself having fallen into spooky ways. I had in all honesty to take her point. And the following is about how she came to be thus.

Me faether in Scotland became entirely enchanted by the idea of gold in the 1920s, you see. If there was such a lot of it down the bottom end of Africa that the Brits had had to go to war to get possession of it, thought he, why should he not go there and get possession of a bit for himself? A harrd-workin’ wee mon, he would hard work his way as metal turner from Cape Town to the romantic Reef of White Waters, town to town, dorp to dorp, and this he did, along the way in Klein Drakenstein becoming entirely enchanted by Maria du Clerq, pianist, music student. Of the famed Professor Dampier, no less. My ma to be, this, future tense. Seventeen, pure Huguenot French with Mandela high cheekbones and merry Khoi eyes and herself ready for a bit of gold on the romantic Reef. Hoots, mon! Marriage an’ awa’! 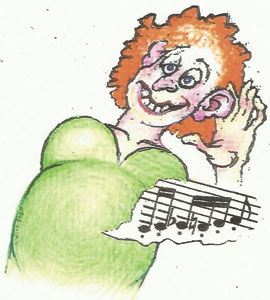 But there was no gold in Joburg, only mine dumps, and even worse there was no piano. Never to worry, said Ou Tante Koba at the boarding house where our turtle doves had taken lodgings. Over at McGinty’s Saloon they are desperately looking for a pianist who doesn’t drink, said she; McGinty himself is a Scotchman and a Protestant too, decent, so you’ll get along just fine. And that’s where they went, my dad and mum, with me inside by this time. And what kind of music do you play then? said McGinty, wildly, excitably. Beethoven, said my ma. Sweet and holy mither of Christ! cried he, crossing himself. Silence. I need the piano, said my ma, I’m supposed to practise five hours a day for my exams. Missus, said McGinty, you’re welcome to the pianner but bejasus buggerd if Oi’ll boiy the Beethoven. Done! said she, I’ll work for tips.

Well it’s in the nature of background music that nobody listens to it anyway. As long as there’s somebody banging away at a piano so you have to yell hard to be heard, you’re having a good time.

The din was appalling, for carousal McGinty’s couldn’t be beat, but you know, there’s something sentimental and fatherly about putting money in the beer mug of a poor pregnant girl slaving away so near her time, so we did pretty well on the whole, my mum and I, inside and outside. We got lucky. But life was never a matter of luck for very long. McGinty was snatched away one Friday night and locked up in a police cell and on the Monday morning charged with public indecency in that he did, in the matter of a wager, at 11.30pm on Friday 13th of May at premises heretoforth to be known as McGinty’s Saloon attempt to have carnal intercourse with an ostrich.

Of course he was found guilty, the circumstantial evidence was overwhelming, including the ostrich and a stepladder, but there had to be a plea in mitigation before sentencing, see, if the accused so desired, and McGinty addressed the court, saying: If it please Your Worship, Oi am prepared to marry the bird.

Well as tarm flars, so it flew. So did me faether, as far from the Golden City and McGinty as his meagre savings would take him, and that was Durban. Here he found honest Protestant employ in the railway workshops and I entered this world in Umbilo and got named after the doctor who supervised my entry. How sweet was normality! Ten years’ worth of it! Until suddenly, breathlessly, because of the sea air, the doctor said, I was struck down with asthma. There I lay writhing and gasping for just one more breath, please God, until one evening I gasped to my ma Would you play the piano for me, please? Poor soul, she’d had no time at all these last years to play for herself, or indeed me, they were all of them taken up teaching other peoples’ kids their scales and arpeggios. Here and now she set to, eagerly 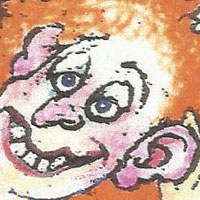 , with a few mistakes for sure, but who cared? A Beethoven sonata, she sang happily along and I sang along with her note for note, eagerly. Breathlessly, but who cared? Suddenly she stopped. Bejasus! she exclaimed, McGinty! Seems this was what my unborn ears had listened to endlessly within six inches of McGinty’s pianner, I knew the whole sonata off by heart. She tried other sonatas and I knew not a single note.

Well whether it was McGinty’s sonata or lots of athletics later on that fixed the asthma is a moot point, but the melody lingers on. And many many years later here I see this daughter of mine, the spooky one, lying preggersfontein on her back reading a magazine and her great belly exposed with a pair of headphones stretched across. And over there on the CD player I see the cover for a Mozart symphony. A bit spooky, innit? say I to daughter. Hmm? she replies. It runs in the blood like a wooden leg, says she. The Salvadorean b*llsh*t has seeped in her soul.