In most countries the crime intelligence division of the police performs a highly sophisticated function collecting and analysing often sensitive information about high-level crime and criminals. But a secret report that has been buried in the files of the National Intelligence Service since November, shows that in South Africa, the SAPS Crime Intelligence Division is too busy defrauding and stealing from the public to be much bothered with other people’s criminal activities.

The criminal network operating within the division is headed by no less than the Divisional Commissioner of Crime Intelligence, Lieutenant General Richard Mdluli himself  – and a mysterious, unnamed person who is apparently so powerful that the author of the report dares refer to him only as “the Prominent Individual in KwaZulu-Natal”.

Contrary to convention, Mdluli was hand-picked to head the unit by Minister of Police Nathi Mthethwa and a committee of ANC ministers. Normally the heads of police divisions are selected and appointed by the Commissioner of Police, advised by senior professional policemen, not by politicians. So controversial was the appointment that former National Police Commissioner Tim Williams publicly described Mdluli’s appointment as “completely unusual” and “not regular” and claimed that the politicians had “hijacked” the process.

The damning secret report, dated 4 November 2011 and marked Secret on every one of its 13 pages, was written by the Head: Intelligence Analysis, Co-ordination and Surveillance, Major General Mark Hankel, and was countersigned by the Acting Divisional Commissioner: Crime Intelligence, Major General C P Kock.

In July last year a case of corruption and fraud was registered by the Hawks at Silverton Police Station as Silverton CAS 155/07/2011. The accused was Lieutenant General Richard Mdluli, head of police Crime Intelligence.

Informed sources have confirmed that, within three months, extensive evidence of corruption involving Mdluli, senior police officers and even journalists had been uncovered. However once the investigation began to look at renovations carried out at Police Minister Nathi Mthethwa’s home and a Mercedes Benz ML350 bought by Mthethwa with secret police funds, it did not take too long for the Inspector General of Intelligence to become involved.

In the concluding paragraphs of his report, Hankel finds it necessary to state the following: “It is submitted that the Intelligence Services Oversight Act does not negate the statutory duty to report corruption to the police for purposes of criminal investigation.”

This would seem to suggest that it had been proposed that the intelligence service take over the investigation to the exclusion of the police.

The situation echoes that of the case registered at the Berea police station in Durban by DA MP Diane Kohler-Barnard against Jacob Zuma’s lawyer Michael Hulley, after it emerged that Hulley had obtained recordings of telephone interceptions between senior prosecutors involved in the case against Zuma. Once this complaint had made its way to the Inspector General of Intelligence there has only been one development: the Inspector General confirmed that the phone interceptions were legally undertaken. But Kohler-Barnard has never been told whether Hulley legally has possession of the tapes  – a key part of her complaint.

“I suspect the Inspector General is a whole new way for those in power to defeat the ends of justice. This is outrageous,” she said.

When the Crime Intelligence Division leaked a CD of crime scene photographs to Sunday Times reporter Mzilikazi Wa Afrika some time in the latter half of last year – as he has claimed happened when interviewed by Noseweek – they clearly had their reasons for wanting him to use the material to discredit the Hawks’ organised crime unit: the Hawks had not only arrested Mdluli and charged him with various serious crimes, including murder and kidnapping; they had by then cottoned on to some of the more lucrative criminal conspiracies operating at Crime Intelligence.

Rackets operating in Mdluli’s Crime Intelligence Division and exposed by the Hawks investigators  revolve largely around the so-called Secret Service Account, a secret police slush fund that was supposed to be used to fight crime, but, it emerges from Hankel’s secret report, was used instead to fund crime.

They range from paying one unnamed journalist R100 000 to write a positive story about them, and another unnamed journalist R50 000 not to write a negative one that “would have been extremely prejudicial to a very senior female general in the SAPS”, to buying houses and luxury cars for family and friends, to installing Mdluli’s entire extended family plus various girlfriends in well-paid fake jobs funded by the taxpayer, to making regular payments of R50 000 in cash to that mysterious Mr Big in KZN.

On the subject of Mdluli’s illegally acquired family benefits, Hankel reports: “It is evident that besides the employment, inappropriate promotion (some at senior officer rank levels) and placing of family members of Lt Gen Mdluli in the agent programme of Crime Intelligence, family members of a Major General and a Colonel in the division, as well as that of a prominent person recruited to allegedly influence the National Commissioner of the SA Police in favour of Crime Intelligence were [also] placed in the programme.”

In total 23 people that fall in the above category are deployed as: “Principal Agents” in the programme. As far as can be ascertained, none of these are actually involved in bona fide undercover operations of the SA Police Service Crime Intelligence Division.

“It is alleged that especially the family members of the prominent person in KwaZulu-Natal go about their ‘normal private lives’ with no benefit to the SA Police Service.”

The report deals in some detail with the fraudulent use of money drawn from the Secret Service Account to purchase luxury cars for the personal use of, inter alia, one of Mdluli’s girlfriends – and for the National Commissioner of Police “for use around his residence in KZN”. (It adds that “the present whereabouts of the vehicle are unknown”.)

Another intriguing snippet: “A luxury vehicle was purchased for a Lieutenant General in another division of the SA Police Service in order to improve the working relationship between herself and General Mdluli.”

The report also records the purchase of a string of houses all over the country, ostensibly for use as “safe houses”, but in fact to house the friends and family of just about every Tom, Dick and Harry in the division – or simply to generate rental for some individual’s private benefit.

At the bottom of the list of criminal activities, this: “Documentary evidence is available from which it would appear that [in contravention of the Police Act] Crime Intelligence sought to influence political processes in KZN through the deployment of a select few covert intelligence field workers from Head Office. This activity included buying influence and access.”

And, perhaps predictably, the probe report confirms that, even at the very early stages, there was a serious attempt to stop the investigation: many frightening examples are detailed, leading Hankel to conclude: “There exists a concerted effort from within Crime Intelligence, and specifically the SSA (Secret Service Account) environment to derail the investigation. This includes the spreading of disinformation. The situation includes what is believed to be a threat to lives and personal safety and integrity of persons involved in the investigation… There is also a risk to witnesses…’”

Of Mdluli and his corrupt cohort, Hankel declares: “They have placed the entire institution, including the agent placement programme, covert air travel, service providers and even operations at risk by abusing the system and exposing it to individuals of dubious character.” 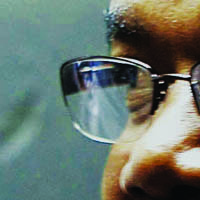 A police force run by criminals

The extraordinary and damning report, exposed here, on the corruption-ridden Crime Intelligence Division of the police – is an example of the sort of information that we may not in the future be able to publish for fear of facing a stiff jail sentence – should the Protection of State Information Bill before Parliament become law.

We publish it here not to be provocative, or to make sensational headlines, but  because publication is so clearly and urgently in the public interest. When our police service – or a major part of it – is run by criminals, where are honest citizens to turn for protection against crime and corruption?  – The Editor.