I don’t know why war dancing seems to have gone out of fashion. When I was a small boy you could bet your life on it, here in Natal, when you got a dozen-or-so true men together with enough good booze, round about midnight one of them would leap up and start kicking his legs about and yelling Ayizikazimbazimbazimba! which is a very fierce Zulu war cry. Then they’d all leap up and cry Hold him down, you Zulu warrior! and stamp the floor fit to break their ankles. A dozen true Caucasian men, that is. Zulu men didn’t do war dancing because they didn’t have access to the good booze, see, all they were allowed to drink apart from tea was a sort of thin fermented porridge with an alcohol content of more or less zero. You’d die of ruptured kidneys before you got poegaai on that lot. Of course if you were a Zulu man with a daredevil white pal he might go and buy you a bottle of something nice, taking care not to leave his fingerprints on it and provided you didn’t bring along another pal to witness the handing-over. But there still wasn’t any war dancing. Zulu ladies never did any war dancing at all, since they hadn’t ever done war. 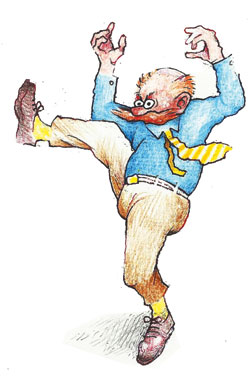 Anyway, when I hit 15 I looked as if I might be 18, with a bit of imagination, and I would buy a bottle of that sort of brandy I supposed one might use for paint removal or washing windscreens, buy this I say for a mid-aged-looking bloke called Mkhize who worked at the bakery next door. He used to lap the stuff up, as the expression of the day had it, and get down to some serious goldminer-type sinuous soft stamping, and bust out in loud laughter. But where the war dance? Never! said Mkhize, that is what Red Indians do in America. They make a big fire and beat tomtoms and hop around in a circle and yodel war cries and wave small choppers about, called tomahawks. Me, I dance because I’m happy, like Fred Astaire. War dancing is not for soldiers, said Mkhize, it is for men with big feet and small guts. You mean big mouths and small hearts? said I. Something like that, said he. End of history lesson.

Now it’s 2008 and I’m off to Knysna with me old fishing chum Baruch, who has the presence of a small irritable garden gnome with a giant ginger moustache but, I tell you, what an angler! He has some kind of built-in fish sonar which I imagine to be in this ’tache, like radar antennae, also he has a small tin boat with a small outboard motor for silently nipping in amongst the monster vyf-honderd perdekrag cabin cruisers of the Gauteng rich on the St Lucia estuary. Making off with half the shoal the ’tache has picked up before, these monsters can up anchor and move across and make their first cast. Of course modesty forbids my saying I am the other half of our deadly team, but there you are.

And here we are on the Knysna lagoon, Baruch getting terribly irritable because I keep calling his tin boat the Bismarck and he hates my sarcasm and loves his boat like anything because it has a specially scientific shape of hull seen on no other vessel ever, including the Kriegsmarine behemoth of that name. And you don’t seem to hear me when I tell you you’re using your reel the wrong way, says he. Nag, nag, nag. But I’m pulling in as many fish as you, hey? say I, and there the matter rests because a kabeljou the size of your leg drags the Bismarck down to the gun’ls on his side and he needs me with the net. Now he’s happy because this fish perhaps will win a big prize at the Grand Hotel angling contest this evening.

A big do, this. It’s the height of the season and there’s not a bed left for another tourist in any Knysna hotel, esp. the Grand which runs anually this tiptop national estuary-fishing contest. There’s a weigh-in and braai in the evening with plenty beer and everybody smelling of bait, then all go off for a shower and shave and maybe a quick nap and put on a jacket and a tie and off to the hotel dining hall for a cabaret with good liquor and the presentation of trophies. Posh. The usual table staff of local klonkies have been given time off, German tourists want to see proper black Africans; handsome young Xhosa waiters have been brought down from a PE agency and done up in crisp white uniforms with red sashes and shiny shoes.

And these trophies are serious silver cups of trad classical design, ’ksê. 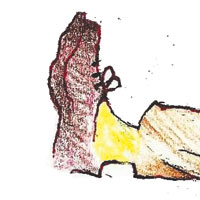 There’s a cup for every category of skill: the most fish, the biggest fish, a cup for each species, about 10 cups in all. But there’s one cup left over. Nobody has caught a single steenbras, the emblem fish of Knysna. Puzzlement, and a bit of tension. But the booze is good, and plentiful, and after a bit Baruch is entirely pissed and leaps on to the stage and emits a bloodcurdling Ayizikazimbazimbazimba! and slams his feet about on the wooden planks and yells Hold him down, you Zulu chief! and the Xhosa waiters get the cramps laughing, it’s quite the daftest most bloody stupid thing they’ve ever seen. I mean they really are clutching their bellies in agony, and the head Xhosa waiter staggers on to the stage and gasps Please please, he gasps, the extra cup should go to this gentleman for the best Zulu war dance of the evening, and all the Germans clap hands and whistle, so the manager can scarce disagree. He hands it to Baruch with a thin smile. Ja ja! cry the Germans. Ausgezeichnet!