Asim Qaiser was a star employee of asset managers Oasis Group Holdings. By all accounts, the quietly spoken 36-year-old Pakistani national is something of a tough cat: he survived four-and-a-half years at Oasis, from 2006 until 30 June 2010. When he started, it was a material condition of his employment that he would join the Oasis Crescent Retirement Fund.

He was a model employee – no fewer than three external and independent Oasis Group auditors certified him so.

Qaiser left Oasis with a clear conscience and, he believed, a good record. But the hapless man had clearly not reckoned on Oasis’ being somewhat like the Hotel California: “You can check out any time you like, but you can never leave!” Some 18 months after checking out from Oasis it would appear that the poor man cannot leave.

Qaiser was unable to obtain his pension. On 25 July 2010, he complained to the Pension Fund Adjudicator (PFA), stating that Oasis’ HR department and the group chief financial officer, Manie Mayman, had undertaken to make payment by 30 June 2010. To this end, a SARS tax directive, dated 29 June 2010, had been obtained by Oasis. When the money didn’t materialise, he followed up with Oasis and on 3 July was assured by the company that all that remained was for the principal officer of the Oasis Crescent Retirement Fund to sign off his forms.

On 20 October, Oasis’s HR boss, the decidedly fraudulent ex-professor Dr Mohamed Bayat, responded to the PFA with indignation: “We wholly reject Qaiser’s allegations, and set out below the details of the circumstances relating to this matter.” Then follows a six-page rant in which they declare their “clear intention to institute legal proceedings against this former employee” for an amount of R1 042 142.00 – being “damages” suffered as a consequence of Qaiser’s termination of employment.

Two months later, on 15 December 2010, summons was issued by the Western Cape High Court. Actually, two virtually identical summonses:  the second being against former Oasis employee, Naresh Karia. Both were signed by “Uncle” Nazeem Ebrahim (nose147), chairman of the law firm acting for Oasis, Ebrahims Inc – and deputy-chairman of Oasis.

We all know justice is a slow train coming – particularly in this case. The summonses never made their way to the Sheriff for service upon the Defendants. But, curiously, copies did find their way to the PFA – which is where Qaiser’s lawyers eventually obtained them. They also act for Karia – whose case is similar to Qaiser’s. 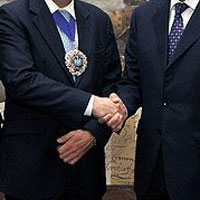 Most people do their damndest to avoid receiving a summons, but on 17 May Qaiser and Karia launched a High Court application demanding that Oasis be ordered to serve the summonses on them within 10 days, and, should Oasis not comply, that their claims be automatically dismissed, and that Oasis pay all legal costs.

Oasis took fright and the sheriff was despatched post-haste to serve the summonses.

Are Oasis desperate to hang on to those provident funds at all costs. or they are they just vengeful of all who dare leave their employ?