Who, forsooth, might Luitenant van den Beestekraal be? Well, this is 1962, see, he is the Head Psychologist in the Observation Section of Pretoria Central Prison, he has a degree from the Christian University of Naboomspruit with Theology, Criminology, Psychology II and certain sacred goeters I forget, he is plump and free from every sin and he is in charge of the psychologicobable rehabilitation of SA’s 1 000 horriblest criminals. Central, the Big House, is where you push your time if you get sentenced to Life or the Indeterminate, that sort of stretch, and here I live in silence in a concrete 2m2 cave, 23½ hours a day. Not that I’m pushing Life or the Indeterminate, Lord love you no, it’s just that there isn’t anywhere else for droogmakers like me, political shitstirrers. I would teach normal crims to read Karl Marx and make explosives in the kitchen. 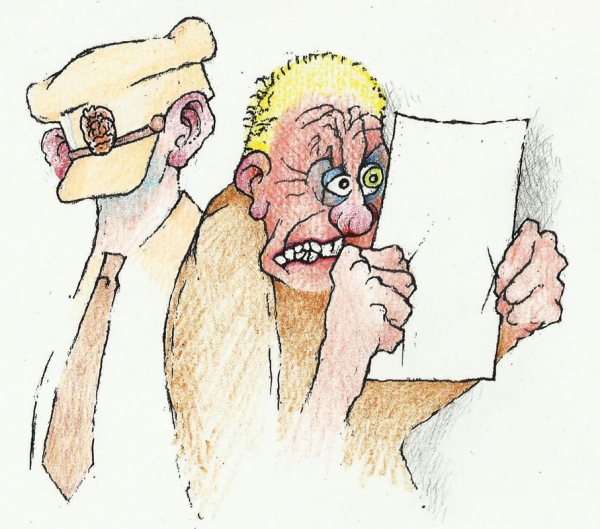 The Observation Section is called the Malhuis because you are a normal okay sort of crim when you go in and a mad one when you come out. When you’re sentenced you sit in there for two months, alone with Jesus and a New Testament Bible, thinking about being a social citizen in the sometime future. Not the Old Testament, understand, you would use that in some Christian way for purposes of onanism. Jews can have the Old Testament because Lt Beestekraal doesn’t give a shit if they trek draad unto death anyway. Hitler could have saved himself a lot of Zyklon B.

Here also we have a warder name of Vatjougoed Ferreira who has sufficient intelligence to breathe and take nourishment and that’s about it. I tell him my socks got flown off in the wash and my feet are freezing, it’s midwinter on the highveld and the water in my tin mug is ice, that’s how cold it is. His cap is too big and it balances on his ears, if he suddenly stops walking, the peak slowly descends over his eyes; it thus descends now as he opens my door one morning so the section cleaner bandiet named Blekkie Swart can give me my porridge.

I say to Vatjougoed, Asseblief tog meneer, eksê, try to remember my socks, ek kry vreeslik koud in die nag. This makes him proper irritable in the dark there and he says You think only of yourself! I’ve only got two hands and two pairs of feet, what do you think I am? and the answer is I think he’s a centaur, but if I say that, I won’t get any food at all tomorrow. Ja, meneer, say I.

Ou Blekkie has a glass eye which he fixes hypnotically on me, the other I notice darting about as he skiems kraaim, that’s his profession, hey?

Pssst! he says later that day through the small air-hole in my wall. Pssst! I have spoken to a certain bandiet Roux, name of Kenger, he is the psycho’s clerk, he has had a quick look at your file and he sees you are an artist and he will smokkel some socks for you if you draw him a picture of a naked goozoo, which is to say woman, I mean girl. He will fly off some quality departmental paper for you and a pencil from the psycho’s desk.

Done! say I. Just before lockdown paper suddenly appears under my door and a pencil through the mesh of the air-hole and I set to right away, and next morning when Vatjougoed arrives with my breakfast and once more the peak has descended, I slip this graphic to ou Blekkie and he slips it under his baadjie after a quick glance. Here God! he gasps. Through the air-hole later on he whispers breathlessly Yirra Yissis! You owe me one too, hey, I done the deal. Okay, say I, and I’ll give you two goozoos doing rude things if you throw in another pair of socks. New, fluffy, say I, not anybody’s old socks. You don’t want snout, hey? says he. No, say I, you trade the tobacco for the socks. Which he does.

The gleeful gymnastics in ou Blekkie’s picture are grotesque, the drawing technique gives meaning to the word “graphic”. His legs go so slap he has to sit down on the floor to look at it. And one morning shortly thereafter my door is furtively opened, no great jangling of keys and traditional slamming about, so silently I don’t even hear it because I’m having a little sitting-up ziz, and there stands Beestekraal, aghast at what he is doing. His eyes are sunken and lurid, his skin pallid grey, 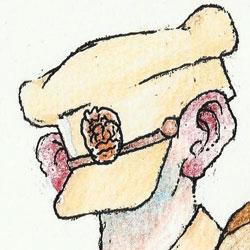 it’s clear he’s had a bad night, spiritually inflamed, tortured, tossing about. He’s seen ou Blekkie’s pic somehow. A crimson flush rises from his collar and tie as he parts his lips to speak. But he can’t. Quietly he closes the door and departs. Ou Blekkie appears presently, the psycho skiems he also smarks a droring, says he. Okay, say I, top-of-the-range, multiple goozoos in action, and that will be a nice new extra blanket and an extra felt sleeping mat, thank you. And a jersey.

In this Kunstwerk for Van den Beestekraal, the sexual aberrations are beyond the fantasies of Art, Science, Sociology or Psychotherapy. One might view this lot as a sort of Gothic Wrestling, I suppose, or a great girly rugby tangle, or that huge wriggling female heap of sinful women in Michelangelo’s Last Judgment. But whichever, v.d.B disappears entirely from my ken. Maybe he just felt sensitive about it, embarrassed hey? Maybe he just went the way of the Jewish bandiete in the Observation Section, and who gives a shit? Not I. I’m having a nice warm winter.