The Proposed Lion’s Head  development (nose145) becomes more intriguing by the day. On 16  November, the Western Cape Depar-tment of Environmental Affairs and Development Planning ruled on the planned eight-tower apartment complex, which is likely to become another scar on the mountainside for Capetonians (a la the notorious Tampax Towers – more formally, Disa Park).

The Director Land Management (Region 2), Zaahir Toefy, held that the development should not be allowed, saying lots of nice greeny things – for example, that a development must be “ecologically justifiable, socially equitable and economically viable, i.e. environmentally sustainable”.

Great news! But not so fast: the decision relates to only one section – Block E.  Toefy fails to deal with the rest of the site, and he doesn’t even allude to the fact that both the City of Cape Town and the objectors feel that the biodiversity issue affects the entire site.

So what does this mean?

Well, the developers can file an appeal if they’re determined to proceed with all eight blocks. And that appeal will go to the Western Cape Minister of Local Government, Environmental Affairs and Development Planning, Anton Bredell. Bredell – as Noseweek pointed out in the previous article – showed some steel recently in relation to the Lagoon Bay development in George.

But people within the City of Cape Town have pointed out that Bredell’s head of department, Marius du Rand, was part of the team that first presented the Lion’s Head development to the city as a proposal some years ago. (When Noseweek spoke to Du Rand he admitted he’d been part of the team that presented the proposal to the city for a company named Lombard Finance, but insisted that, as the appeal would be heard by his boss Anton Bredell, there was no conflict of interest.)

Another possible scenario is that the developer simply accepts the decision. In which event it seems very likely it will be able to proceed with the other seven blocks because, as Noseweek understands it, it’s then simply a city issue rather than a provincial issue, and the word from the city is that this development has its tacit approval.

However, the city’s  Environmental Management Depart­ment is strongly opposed to it, and concluded: “The entire development site should be treated as sensitive from a biodiversity perspective unless there is evidence to the contrary. Biodiversity Management does not support development at this site without significant mitigation in the form of a biodiversity offset.”

Those opposing this development have long suspected that the developer may plan to sacrifice Block E in order to get the other seven passed. That, they say, is why the developer used the wrong map in the first place. 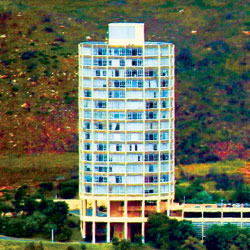