Enver Motala was removed from the roll of liquidators in September, on the basis that he had – and had concealed – a criminal record. Few tears were shed: the well-connected and enormously wealthy Motala has been highly controversial, having been appointed as a liquidator in literally hundreds of liquidations, often with the support of the unions (See noses113, 126, 127, 128 for examples of Motala’s machinations). 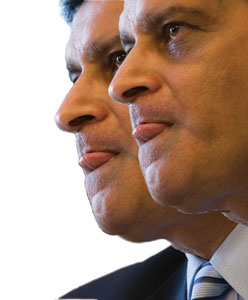 There are now rumours in Joburg’s legal fraternity that Motala will use his contacts – like Aurora directors Khulubuse Zuma (President Jacob Zuma’s nephew) and Michael Hulley (now Zuma’s official legal advisor) – to persuade the President to pardon him for his criminal convictions, thereby enabling him to get back into the very lucrative business of being a crooked liquidator.

Noseweek quotes directly from the letter of 5 September 2011 removing Motala from the roll of liquidators. Written by the Deputy Master of the High Court, Mrs C Rossouw, its dry legal tone leaves no doubt as to what a disgusting little turd Motala really is.

Rossouw gets straight to the point:

“I hereby inform you of the Master’s decision to remove you from the panel of approved liquidators and trustees.”

She then deals with claims made in the press “that Motala was convicted of criminal charges under his previous name, Enver Dawood, and that he therefore shouldn’t ever have been a liquidator. On 17 August 2011 you attended at the Master’s office and gave evidence under oath. In the course of your sworn testimony you:

• Denied that you had ever been convicted of theft or fraud;

• Stated that you had no idea of the identity of the person referred to in the Citizen article as sharing your identity number;

• Had no idea of the offences allegedly committed by that person;

• Did not know who Mr Enver Mohamed Dawood is, and;

• Knew nothing of the convictions of theft and fraud attributed to Mr Dawood.

“On 17 August 2011 the Master wrote to you and informed you that the Master’s investigations had revealed that:

•  One Mr Enver Mohamed Dawood had been convicted of one count of theft and 93 counts of fraud;

• Mr Dawood (who coincidentally  has the same first two names as you) is the person who shares with you the identification number as referred to in the article published by the Citizen;

• An application made in your name to the South African Police Service on 30 July 1992 for a firearm licence disclosed an acknowledgment by you of convictions which appear to accord with those attributed to Enver Mohamed Dawood.”

After dealing with the fact that Motala failed to take opportunities presented to him to deal with this issue, Rossouw goes on to say: “The Master can have no confidence in your candour, integrity or transparency. The Master accordingly cannot entrust the administration of companies in liquidation and sequestrations to you. More particularly, the Master cannot allow the continued entrustment of millions of Rands of funds in such estates to you.”

Rossouw then moves on to the Pamodzi liquidation (where Aurora ruthlessly stripped the assets of Pamodzi Gold’s Orkney and Grootvlei mines, and where Aurora director Khulubuse Zuma refused to give evidence at the subsequent enquiry, raising the fairly rare “I’m too fat to fit into a witness box” defence).

Rossouw goes on to mention that Motala, like young Zuma, also had a hissy fit, and refused to testify before the Master.

Says Rossouw: “Pamodzi is a matter which increasingly became a matter of public concern. Concerns included the cessation of mining activities, accounting for gold from the mines, the dismantling and removal of mining equipment, and the poverty and destitution of mine employees and their dependents.

“The conduct of the liquidators in the context of the aforegoing warranted investigation by the Master.

“The Master was also interested and concerned about the award of a contract to Aurora Empowerment Systems (Pty) Ltd (Aurora), a company which appeared to be under capitalised, unable to afford to run the mines properly and unable to come up with the money to satisfy its financial commitments to the Pamodzi liquidators...

“One of the most important matters that the Master wished to investigate in Pamodzi was why the liquidators persisted in affording extensions of time to Aurora to come up with funds, which it appears they had no prospect of doing.”

The Master had also heard rumours of:

• Your relationship with people, more particularly the Bhana* brothers who were running the mining activities of Pamodzi; and

• Monies that had passed between you and/or your company SBT Trust (Pty) Ltd (SBT) and Aurora.”

Rossouw’s letter goes on to list a number of payments made by Aurora to either SBT or Motala totalling R1 306 886. It then talks of a payment made by Motala (SBT) to Aurora for R3 million, and records that Motala explained this as follows: “Aurora had cash flow problems and asked the provisional liquidators for help with paying salaries, but because none of the other liquidators was prepared to chip in, SBT provided the loan, for which it was repaid by Aurora by way of seven payments.”

But, says Rossouw: “We have taken up the question whether there was a request made by Aurora to the joint provisional liquidators for a loan to pay salaries and wages. Messrs Gainsford, Engelbrecht, Petersen, Botha and Pellow have no recollection of any request of that nature. Some of them expressly deny that this occurred... 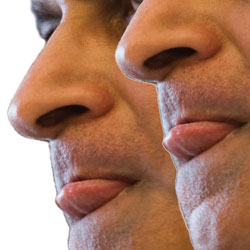 “Unbeknown to the Master and apparently your co-liquidators, while Aurora was obtaining the extensions aforesaid, you, on your version, were both making loans to and receiving payments from Aurora.”

It will be an absolute travesty if this man is allowed to practise as a liquidator again! – Ed.

*See nose140, where we wrote about Rafik Bhana, a senior counsel and cousin of Enver Motala. Motala, who was the provisional liquidator of a company called Masters International Tobacco Company, insisted that his cousin be briefed in matters involving the company, and Bhana showed his appreciation by racking up an enormous bill for reading documents.