Baby Michael, blinded and crippled both physically and mentally after ferocious assaults in the family home only months after his birth, has died, aged eight.

Michael’s death – of broncho-pneumonia, on 16 October – came just a month before his parents, Malinda Marshall and Bradley Connor, were due to face judgment on November 21 in the Johannesburg Regional Court, on charges of attempted murder and assault on their infant son.

Their case, which has been extensively reported in Noseweek (noses108, 121, 130 etc) has been dragging on for years, with one legal ploy after another used to delay the day of reckoning.  Magistrate Frans Booyens has had to come out of retirement to conclude the case in Court 17.

Senior prosecutor Carina Coetzee says it was too late to change the assault charges to murder as Michael’s death came long after the original assaults.

Baby Michael, born on 11 July 2003, was taken into care in 2007 at Avril Elizabeth, a private residential home in Germiston for the mentally disabled. He lived in a section of the home called the Nursery, where he received 24-hour care. He attended physiotherapy daily, and although he didn’t progress much, did not deteriorate.

Officially, after his beatings at age two to four months, Michael had Shaken Baby Syndrome. In addition to being blind he was spastic, quadriplegic and was profoundly mentally handicapped. He was confined to a wheelchair but after prolonged physiotherapy was able to hold up his head without support, albeit for short periods of time.

Nursing sister Stephanie says: “Although profoundly mentally and physically handicapped, he was comfortable and had a reasonable quality of life for four-and-a-half years at Avril Elizabeth. He seldom cried for no reason and seemed content.”

Michael had a host mother, Gwen Hedges, who has a mentally challenged child. Gwen visited Michael frequently at Avril Elizabeth, and took him out for family birthdays and celebrations. “We were shattered by the news, but we rest in the peace that Mickey is finally free,” she says.

Michael’s parents never saw him again – Avril Elizabeth only agreed to accept him on condition they were banned from the premises.

Because of Michael’s mental and physical condition he was unable to move. This immobility caused build-ups of phlegm in his lungs, leaving the boy susceptible to chest infections, resulting in bronchitis or pneumonia. As with many mentally-handicapped people who are unable to communicate other than by crying, it was often difficult to establish what the problem was, and nursing staff would go through a process of elimination. 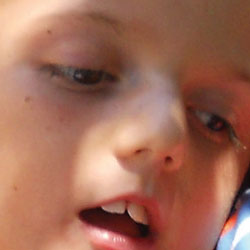 From August this year, Michael had not been well, and spent several sessions in Avril Elizabeth’s sick bay, the Life Healthcare Roseacres Hospital (where he had a CT scan), and at Charlotte Maxeke Academic Hospital. Staff remember Michael as a generally happy little boy, “our treasured little angel” much loved by all.

Baby Michael’s story has highlighted the dedication and commitment of charitable institutions such as Avril Elizabeth and their belief that every life has value, even that of a grievously brain-damaged child – if only for his uplifting smile.

A Noseweek staff member who visited Baby Michael recalls the boy’s beautiful smile. “Look!” would cry the nursing attendant, “he knows it’s you!”