Now I wonder how the Romans got on with their monumental great engineering feats without a denary system of numbers, just that weird lot of Ms, Cs, Ls, Xs, Vs and Is. I mean how bejasus do you do multiplication and division of daft numerals written with letters of the alphabet, never mind calculating square roots? Roman maths are entirely without imagination, while maths we call Arabic seem to be nothing but imagination; well, let’s say imaginative logic, if that’s not a contradiction in terms. And please to remember there was no such name as Arab thousands of years ago when the system evolved somewhere between the Med and Pakistan. 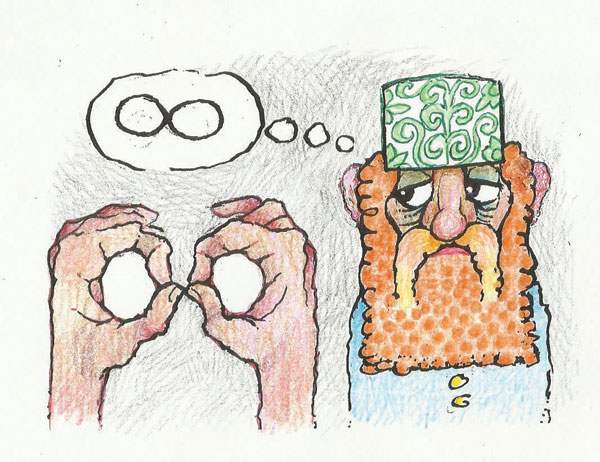 Writing things down in columns of 10, as we learned to do in primary school because we have 10 fingers, and until the written maths came along, we used to count by sticking them one by one in the air, that takes a bit of imagination for a start, hey? But when there are no hundreds, tens or units in a particular column and you want to indicate the fact, to put forefinger and thumb together to show there’s nothing in that hole and then declare this configuration to be the number Zero, nought, boggerol, that’s pure fantasy.  Anathema to a Roman, who would ask in Jupiter’s name how you can have a name for something that doesn’t  exist?  Well, it’s Zero that gave us the 10 numbers of the system. Fact is, there are only nine.  And none of them can be a minus number.  It’s absurd to say there is a minus number of apples on the table. But we work with negative numbers all right because we have to get on with the important matter of Life and can’t waste time pondering the imponderables of it.

Now we come to the real heavies. By the time Pythagoras and chabbas came on the scene they had some really ingenious stuff at their service. Where do parallel lines meet? Why, at infinity, of course. But there’s not really any thing, place or time called Infinity, man, you can go on pondering forever, round and round, but we’ve used the round symbol for Zero so we’ll have another, we’ll use the figure 8 which goes round and round in opposite directions, left and right, to the past and the future, forever. And we’ll lay it on its side ∞ so we don’t mix it up with the number 8, and thus we still use it in our maths.

But the trouble is there’s no Forever. Before the Big Bang there was no time and no space, and after the Big Crunch there will once again be none. We mere youman beans evolved in a perceived universe of three dimensions plus time. We aren’t and never will be equipped to grasp the weirdities of it all, so let’s give them a name, use them without understanding and get on with the urgencies of existence.

It’s easily done. Zionist Israelis are able to perceive a creature called a Self-hating Jew, whom they don’t define because definition gets in the way of… of… well, everything. Looking about, we find no self-hating Inuits or Caucasians or Aboriginals, only Jews. If Inuits, Caucasians or Abboes dislike the behaviour of the Zionist State of Israel, you can call them antisemitic to dodge the issue. But you can’t logically call a Jew antisemitic, so you integrate this self-hating one into your system with a label, but without definition for inquisitive people, while you get on with the sanctimonious colonising of Palestine.

But hang on! I remember when we had Self-hating Afrikaners in our own land. Though, well I mean, we shouldn’t refer to them as Afrikaners any more, since most Afrikaners have turned out to be unwhite, so let’s go to the original gutsy name they were designated, Self-hating Boere. And the most self-hating of the lot was a Boer name of Bram Fischer: traitor, communist, mislike bliksem. See him sitting here hating himself in his solitary cell in the Politieke Witmens Gevangenis in Pretoria for the rest of his life, which isn’t going to be too long, don’t worry, because he’s got prostate cancer.

And lo! in this very same politieke boep, also for life, is another mislike self-hating bliksem name of Goldberg, Dennis, only he’s an S-H Jew who dislikes Zionism and says so, openly, as well as saying openly he dislikes Witmens Democracy.  Now he says a lot of other things openly to the superintendent of this boep, things not allowed on another prisoner’s behalf, like: Meneer, dis onregverdig, it is unjust, that Fischer is not in intensive care, nor even in a hospital, he can’t look after himself any more, he can’t find relief from his pain, he can’t get up to drink water in the dark, he can’t make his way to the lavatory pan. At least let me move into his cell so I can help him at night. Well no, regulations disallow it, because of sodomy, murder etc.

But Goldberg doesn’t let go, whilst top post of Gevangenissuperintendentbeampte is a soft job, and Goldberg eventually over the months wears down the Super and moves in. And this is what people get for hating themselves: wiping somebody’s desperately sweating body with a dry cloth in a solitary prison cell in the dark in the middle of the night in an icy concrete cave on the Transvaal highveld. Nursing a dying man, infinitely. A Self-hating Boer and a Self-hating Jew, what a combination. You asked for it, bastards.