Books: Sex and the single Trekker

Canvas Under the Sky 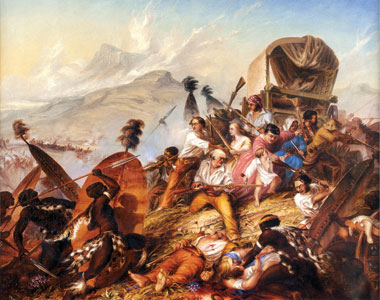 Brace  yourself – enormous cracks are bound to appear in the Voortrekker Monument foundations within days. At the time of going to press, the enormity of Robin Binckes’s revisionist tract on the Great Trek had yet to erupt.

But the aftershocks will soon discomfit earnest historians the land over. Never before has the stern image of those brave pioneers been questioned. Now we have Canvas Under the Sky, which might, more appropriately, have been titled Boet Cassidy and the Sondans Kid.

It retails the exploits of randy young trekkers Rauch and his pal Jan through a skop skiet en donder tale that is surely made for Hollywood. Trekker, in this context, is capable of various interpretations. Canvas illustrates accurate historical detail with enthusiastic sex; sex with slaves, sex with deep-bosomed settler women, self-service sex... Kamp Draadtrek of curious rugby notoriety had nothing on this lot.

Let it be said at once that the conservatively religious Doppers among the trekker communities are shown to be above that sort of thing. But everyone else in the cast keeps going at it like rabbits, despite war raging around. In fact, there is a distinct impression that perils arising from the Sixth Kaffir War and other hostilities add zest to  off-duty activities. Which is, of course, a well-known phenomenon.

The dialogue is peppered with the K-word, since that was the usage of the time.  If anything, “British” and “English” are used far more pejoratively. There is trekker sympathy for the 1820 settlers, dumped in the wilderness by the British overlords as a buffer between the restive frontiers with the Xhosa and various other tribes. And not a little condescension. The chiefly urban settlers were, after all, totally unsuited and unprepared to meet the challenges imposed by an irresponsible and unrealistic imperial government. The trekkers are shown as ready to face fierce tribal armies in preference to buckling down to colonial rule. They do, however, accept the British abolition of slavery.

Binckes has undertaken to show that the white trailblazers were both lusty and courageous. The emphasis on sexuality is, perhaps, exaggerated, but nevertheless a relief after years of  historic solemnity. Battle scenes have been researched and are rendered with bloodthirsty relish.

Canvas has a cast of thousands, from Hintsa to Potgieter, Mzilikazi, Pretorius, Harry Smith, D’Úrban, Uncle Tom Cobbley and All. They are all treated with modern familiarity instead of historic reverence. It’s a disgracefully entertaining read.

Opportunism? Why else rake over the sensational events before M’Lud had decided whether or not to permit accused Shrien Dewani’s extradition to South Africa, to stand trial for
the murder of his wife Anni? Surely author Mike Nicol is simply penny-snatching?

Not so. Far from being a ho-hum regurgitation of increasingly bizarre headline horrors, Nicol has cunningly created an unputdownable guide for all those Madame Defarges who wish to bone up in anticipation of the denouement. It would be unsurprising if the public benches in the courtroom flourished copies of this little yellow book during the trial. If, that is, there is one. At the time of going to press, the British system had not yet delivered judgment on the extradition question.

It remained to be seen whether President Jacob Zuma’s recent suspension of Police Commissioner Bheki Cele would get a mention in the judgment. Cele’s little linguistic infelicity about a foreign “monkey” arranging a cut-price murder in South Africa has figured in defence argument. And then there is the unhappy business of Western Cape Judge President John Hlophe’s entanglements, mentioned abroad as further evidence of dodgy legal ethics in this our land.

Steinberg (of The Number prison gang documentary fame) states with icy disdain: “If there is anything that brings South Africa’s state apparatus to life, it is the scornful gaze of Europe, the gaze that accuses you of being incompetent because you are an African. Whether the accusation is that Africans cannot stage a World Cup or that they cannot solve a murder, the prospect of racial humiliation turns  lethargic institutions into models of excellence.

“A modern state machinery that on a normal day slumbers through one Gugulethu murder after another, roars suddenly to life. Its personnel descend on the uninsured world in anger and with purpose.”

Nicol marshals his facts deftly, subtly juxtaposing contradictions, absurdities and oddities. Readers are given every opportunity to draw their own conclusions. And Nicol will doubtless make hay with a further book on the outcome of this fascinatingly provocative  scandal.

Dewani is accused of facilitating murder. So is South Africa.

Hotel K justifies its billing as The Shocking Inside Story of Bali’s Most Notorious Jail, but the endless depravity soon provokes Hannah Arends’s disdain for the banality of evil.

Readers – other than hopeless masochists and/or demented thrill-seekers – who contemplate trips to Bali after reading Hotel K should immediately be sedated and sequestered for their own good.

There is horror in the fact that, metres beyond the filthy walls of this cesspit, tourists are blithely surfing the hours away off palm-fringed beaches. So resistance builds rapidly against the filthy facts of  a prison writhing with starving, drug-crazed humanity, and mindless prostitution.

The Indonesian Government must be mightily displeased with Ms Bonella. Tourism is a vital source of income for Bali, but revelations of the numbers of tourists rotting in Hotel K after drug offences arrests is startling. The arbitrariness of their prison sentences reflects the structure of the bribery system. Suffice it so say that many an Aussie (and a few South African) good-timers suffer the wages of naivety. Particularly those who have been sentenced to life imprisonment for relatively unimportant crimes.

The irony is that the prison’s economy depends entirely on a brisk drug trade. It’s easier to get a fix behind bars than on the streets of this benighted “resort’’.

So what to do if you land up in Hotel K? Be rich. Millionaire Australian yachtsman Chris Packer, jailed for having unregistered guns aboard, suffered a bit before realising that he need not wither away in durance vile. He cut a deal, as powerful people do.

A cell upgrade could involve a private room with plasma TV, a soft mattress and internet. VIP prisoners like the Balinese king and the governor of Bali were accommodated in a manner befitting their status, cash and influence.

So are the miserably poor.