The first indication Brad Kibble had that something was about to change for the better was when he was offered a whisky. Brad was in the construction business but things had been a bit slow since the global markets meltdown in 2008.

His speciality had been Tuscan style townhouses which, for some reason, were regarded by many as the epitome of style in Gauteng (although Balinese monstrosities were fast gaining in popularity). Since Brad hadn’t a stylish bone in his body he couldn’t give a damn what he built and how incongruous it looked in the dry Highveld landscape. Over the years he had befriended the right people, bought up land cheaply, thumbed his nose at the idea of planning permission and thrown up hastily constructed townhouse complexes that looked like the set for Cavalleria Rusticana. They were normally constructed in April/May, sold between June and September, and the hapless new owners only discovered the non-existence of damp proofing in October when the first of the summer rains fell and their interior walls began to resemble a ripe Roquefort cheese in both looks and smell. By which time Brad, never a slouch when it came to dodgy dealing, had liquidated the construction company that had been responsible for the leaky Tuscan townhouses and was on to his latest project. Unhappy new owners were directed towards the small print in the sale agreement which pointed out that a feature of many Tuscan homes was poor plumbing and a leaky roof.

But that was yesterday and this was today and Brad was sitting in the rather bling lounge of one of the eager young members of the youth league of an influential political party. Although it was only 10 in the morning his genial host, a Breitling watch dangling from his wrist and a fetching beret on his head, had suggested that they talk business over a whisky. And so it was that a bottle of Johnnie Walker Blue Label was brought to the table with two decent sized whisky tumblers and a 1 litre bottle of no name cola. Brad knew enough about whisky etiquette to know that it wasn’t common practice to pour a premium whisky like Johnnie Blue and then douse it with ice cubes and cola. What he didn’t fully understand was that Johnnie Walker Blue Label was the very pinnacle of the whisky blender’s art and was based upon the premise that age alone, or a single location, are not enough to make up the masterpiece that is Johnnie Walker Blue Label.

Brad politely declined the offer of cola and added a small amount of water to the golden liquid in his glass. His first sip delivered a deep richness and softness, layers of honey and fruit, and left a smooth aftertaste in his mouth. He had never tasted anything quite so sublime and was just about to enjoy another mouthful when his host came straight to the point. It turned out that, thanks to an uncle who happened to be politically well connected, he had just won a R300 million tender to build a new hospital. Flushed with this success he had also tendered for, and successfully been awarded, the opportunity to construct a new International Airport just outside the throbbing metropolis of Ogies. The problem was that he only had two wheel-barrows, a couple of shovels and a pickaxe with a missing handle and had never built a hospital or anything like that before. Bottom line… he would give Brad Kibble the job for 25% of the total value of the tender contract.

Brad thought for about 30 seconds and accepted. Although he was a bit peeved that his “business partner” would be getting 75% for doing sweet FA he also reckoned that he could build a hospital for R50 million tops, which would leave him R25 million clear profit to blow on the good things in life. And how difficult could it be to build an international airport? Brad took another mouthful of Johnnie Blue and shook hands on the deal.

As he drove home in his bakkie Brad’s devious mind began to go into overdrive and he hatched a cunning plan. He had enjoyed that Johnnie Blue so much and knew that it was the Rolls-Royce of blended whiskies and highly regarded by his new BEE friends. He would buy Johnnie Blue as his everyday drinking whisky, decant it, then fill the empty bottles with something inferior and flog them at an inflated price to his new business partners to punish them for the pitifully low cut he was getting on the new hospital. 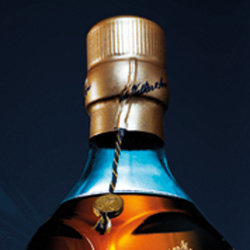 Unfortunately Brad came up with this ruse just as Johnnie Walker was changing the shape of the bottle for its iconic Johnnie Walker Blue Label. The new square shape, blue tinted bottle with the thick glass base was now so distinctive that it would never ever be confused with any other whisky.

Brad only discovered this after he had delivered a large consignment of Johnnie Blue to his partying buddy with the Breitling and the beret and asked for payment. Nobody knows exactly what happened to Brad but the popular rumour is that he is part of the new runway at Ogies International Airport.

Not for Sale to Persons Under the Age of 18. Drink Responsibly.