Now I seem to remember Sir Laurens van der Post departing this miserable ball of mud a few years ago, but I can’t be sure. You see, his departure would not have been such a shattering event as, say, now, the demise of JFK, Mahatma Gandhi or Dr Verwoerd. I mean, there wasn’t anybody excited enough by him to want to knock him off, and what excitement he did generate was in the so-called mind of Carl “Tampon” Saxe-Coburg u. Gotha, also that of the Hon Doc Ivan Palaver, Saviour of the White Rhinoceros, plus a host of Palaverian devotees who believe that Nature is in Balance and extinction is not only unnatural but immoral. So nobody really noticed ou Laurens quietly slipping away, know what I mean? 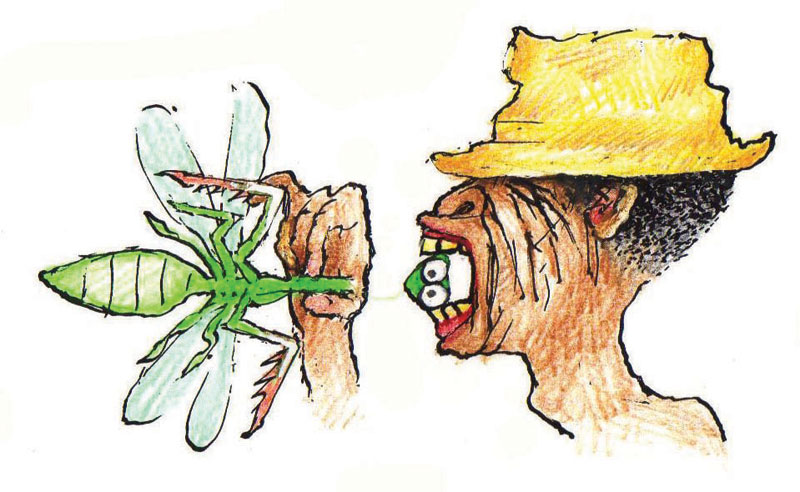 Indeed the only thing that has brought him to mind was a recent conversation with a small boy from the flat next door, name of Zeke, who is doing a project about nasty insects and wants to know about those monstrous great locust swarms we used to have in Natal when I was a small boy – and the first thing that came to my mind was being shown how to eat them by a small mid-aged Bushman, name of Belem. And it was thus I came to remember also Sir Laurens having a Bushperson in his life, an ancient crinkled-up crone in the Cape, who taught him from the age of nought onward all the deep Jungian mystiques of the cosmos, the world and that thing herein called the Human Condition. She did all this with a dozen clicks, and two, maybe three, vowels, the rest being all intuition and profound body language, you should understand. That’s where Sir L got his charisma; she was his personal prophet, so to speak.

And Belem, now, he was my personal prophet. We-ell, father figure actually. He had been brought to Natal amongst other possessions by an old Cape farming family, the Blakeneys, and now his owners allowed him to work for my ma as a kitchen boy, in town, Maritzburg.  Without any Zulu or English, nogal, just a sort of C18th  Namaqua Afrikaans – likely enough brought from the Dutch East Indies along with C17th slaves. In a family of eight women – sisters, cousins, aunts and mother – I was the only male, all others being dead from waging war and smoking cigarettes. And I tell you, I needed a father figure. I was 12. Enough of F. Christmas, I needed logical thought.

Aaai! said Belem, die poes, hy’s too lekka! Ek eet hom!  Thus were the furtive mysteries of sex evermore expelled. Indeed the mysteries of all else in this life were thus expelled. No more keyhole-peeping, no more whispered sexual sin in all-boy schools.  And when, next, one of the monstrous locust swarms arrived – miles upon miles of them – dimming the sun, falling upon our Maritzburg gardens and stripping them to the sticks of everything green, whilst the citizenry banged pots and pans in a sort of frenzy to drive them off, and lit smoky fires, I naturally turned to Belem for something more scientific. Aaai! said Belem, die sprinkaan, hy’s too lekka!  Ek eet hom!

Turned out Belem ate just about anything, including a black mamba one day; great big Zulu ladies saw him as a sort of good-luck utokoloshe, a sexual imp, bringing him delicacies of every sort to whet his curious foreign appetites.

Now one such from next door appeared with a mealie sack for Belem’s supper. I set to with my sister’s tennis racquet beating at the swarm and, chopchop, we had half a sackful vainly kicking about alive alive-o like prawns in a fancy restaurant. 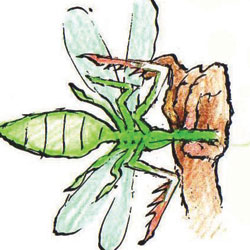 The skill was never to burn them in the cooking, you see, one should reach into the sack and firmly grip a nice big one by his jumping legs, the spiky ones, and quickly shove him headfirst into the coals so his wings and things go WOOF! in a flash and he gets such a fright he craps out all those horrible black pellets, Then you pull off his jumping legs and push a stick through him, fore and aft, and toast him a bit longer and lo! he tastes a bit like popcorn and looks like it too because all his insides have burst through his exoskeleton in stuff like styrofoam.

After locust #5 or 6 I thought a dip of mayonnaise would be nice and found some in the fridge, whereas Belem declared for the apricot jam in there, also he espied a bag of marshmallows and upon biting into one declared it was made from praying mantises, which in those days were known as Hottentot Gods.

A mantis is special because if first you nip off his head, it bites at your tongue as you chomp it up and it has a bit of a kick like drinking brandy, you know, and his big squashy part is a true delicatesse if you toast it but 10 seconds.

Oh SIS! said my sister. How cruel!  Ag nee, said Belem in his Kalahari language, they have a special mantis farm where they eat plenty flies. I don’t know, said I, it’s not as cruel as shutting up hens in tiny little wire cages in a long row where they can’t even flap their wings and all they do is eat hormones all day and lay inorganic eggs for Raymond Ackerman.