Notes: The colour of money

Last August Tony Ball, the owner of Bulwer Park Service Station, lodged a case with the Equality Court in Durban on the grounds that the Ethekwini Municipality is racist in its debt-collecting practices.

He has alleged that the Ethekwini council (and many others, Mr Nose might add) write off all sorts of debt incurred by black people but are extremely diligent in chasing debt owed by their white/Indian residents.

Ball has formally asked the council to produce schedules of their debt write-offs: what amounts and for whom. Now there is a growing suspicion that council officials realise that once they produce these figures, Ball will be able to wipe the floor with them – and that this is why they are endlessly stalling. There have been six appearances at the Equality Court so far and on each occasion the council 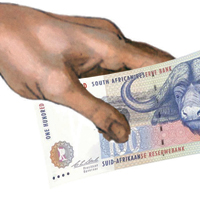 attorneys fudge the issue, and ask for yet another postponement. At the most recent court hearing on
3 August, they simply didn’t pitch.

“In the light of government corruption and wastage of state money I am pursuing this matter vigorously,” he told Noseweek.

And, of course, Ball has personal reason to be angry. The Joint Services Board and Regional Services Council levies introduced in the 1990s were a form of tax on business, based on turnover and salary bill. All well and good, he says – except for petrol stations.

“In the petrol station industry our mark-up is determined by the government – as is the fuel price. Consequently when the fuel price went up, the JSB levy would also rise, but, as the profit margin did not change, the extra levy money would now have to be financed by the business concerned.

“I had a long dispute with the Ethekwini council on this but the upshot was that they took a judgment of R260,000 against me.

“Unable to find any assets to liquidate for this amount, they did nothing from 2006. But last July they resurrected the case and attempted to liquidate me. I came to an agreement to pay the money over a period.”

That was when Ball decided enough is enough and launched his case in the Equality Court.