Not another exhumation of Herr Hitler, I hear you cry. Well, yes it is, but this one is a curiously fascinating visual documentary.

Richard Overy, distinguished professor of history at the University of Exeter, interleaves the text with a range of facsimile commentary pages and unusual pictures. Personal diary notes from various sources enliven the mad tale öf the 1,000-year reich that, although it lasted only 12 years, devastated half the world. 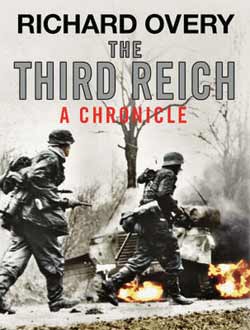 The rhetoric, and clownish behaviour of those long-ago politicians are awfully familiar to South Africans post-Polokwane. Items from the 1920 National Socialist Party Programme (predecessor of the Nazi party) set the tone for the coming struggle:

“We demand legal measures against the conscious political lie and its propagation through the press. In order to make possible the creation of a German press, we demand that:

a. all editors and contributors of German-language newspapers be racial comrades;

b. non-German newspapers must have the express permission of the state to appear. They may not be printed in the German language;

c.   every non-German investment in, or influence on, German newspapers to be forbidden and be punished by the closing of the publishing house and the immediate expulsion of the non-Germans involved.”

Under the heading “Breaking the Bondage of Interest”, the workers are urged to demand the nationalisation of all (previously) incorporated companies (trusts) and profit-sharing in big business.

“We demand the creation and maintenance of a sound middle class, immediate communalisation of the great department stores and their leasing to small businessmen at low rents; most favourable consideration to small businessmen in all government purchasing and contracting, whether national, provincial or local.

“We demand land reform suited to our national needs, creation of a law providing for expropriation without com­pensation of land for common purposes, abolition of taxes on land and prevention of speculation.”

Given President Jacob Zuma’s recent menacing attitude to judges, it is interesting to note that the young revolutionaries of pre-WW2 Germany wanted the substitution of German Common Law for Roman law: “Roman  law serves a materialistic world order”.

Overy’s choice of pictures depicting the development of the reich and its horrific aftermath are, obviously, dated. But the sheer theatricality of major Nazi party events, grandiose architecture and chic uniforms begs the question: would this powerful imagery have been effective on TV? Or would the great choreographed rallies have come across as merely operatic?

Some candid camera shots of the would-be masters of the universe give the lie to all that grandeur. There are distinct echoes of the Marx brothers in snaps such as one featuring the trio of Air Minister Hermann Goering, Economics Minister Walter Funk and Foreign Affairs supremo Joachim von Ribbentrop.

Hitler, Goering and the notorious Ernst Rohm, photographed during the previous regime’s 1932 ban on uniforms, are clearly sulking sans their finery.

What does The Third Reich teach us? We may mock the gaudy demagoguery of Malema & Co, but it is foolish to be dismissive of their popular appeal. 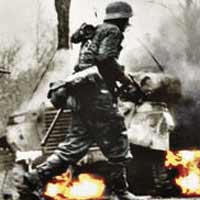 “According to the butler, one of those present was forcing his way in everywhere…  it was Hitler. He had managed an invitation to Baron Clemens von Franckenstein’s house under the guise of being interested in operatic design. Hitler very likely had the idea that theatrical design was connected with interior decorating and wallpaper-hanging, his previous profession. He had come to a house, where he had never been before, wearing gaiters, a floppy wide-brimmed hat, and carrying a riding whip. There was a collie too...he talked endlessly.”

When the gauche young show-off had departed, “there was a feeling of dismay, as when on a train you suddenly find you are sharing a compartment with a psychotic. We sat for a long time and no one spoke”.

But, of course, Hitler soon learned to dress simply, as “a man of the people”. We shall never know what kind of T-shirt he might have chosen to further his ambitions in another age.