Dear Reader: Is plunder a way of life?

“When plunder becomes a way of life for a group of men in a society, over the course of time they create for themselves a system that authorises it and a moral code that glorifies it.”

I wonder whether it ever entered the head of the author of those words, early 19th Century French Libertarian theorist Frederic Bastiat, that they could as easily be used by the likes of Karl Marx: that they as easily apply to monopoly capitalists able to squeeze the poor with high prices and low wages, as they do to the lazy socialist proletariat, out to grab the wealth of the successful entrepreneurs with taxes and other forms of expropriation by the state. Whatever their historical meaning, right now they also perfectly describe the corrupt class that has clearly taken control of our government.

The Public Protector,  Advocate Thuli Madonsela, has been making headlines across the nation. A brave woman, she has declared herself determined to fight for right and hold those in power accountable to the law and to the public. But see our lead story in this issue, then ask yourself: Do they care?

The poor woman not only faces a daily flood of new cases: she has, in effect, for some time been doing not only her own job; half the cases she is dealing with, should have been picked up and dealt with by the Auditor-General, Terence Nombembe. Which prompts us to repeat the question we posed just over two years ago in nose111:  Where the hell has the A-G been? And what on earth is he being paid for?

The indecent contingency fee deals concluded by the FSB with those it employs as curators; the absence of proper audits of the gold holdings and the non-recovery of massive loans made to favoured private banks by the Reserve Bank, they somehow all escape a proper audit. The cases of questionable Valor IT (nose115), GijimaAst (nose139) and several other tenders are still fresh in our minds. The Inseta accounts that were signed off, unqualified.

All those ANC-appointed mayors who cannot read, let alone read a balance sheet; how does the A-G permit them to continue as accounting officers for public funds?

ANC parliamentarians have rushed to reward him with a 64% back-dated pay hike. The same crowd who’ve been allowed to get away with their Travelgate frauds, no further questions asked, are clearly really happy to reward him – for what he hasn’t been doing.

Again in another context, Alec Hogg in a recent blog reminded us of the frog-in-boiling-water theory: Biologists tell us if you put a frog in a pot of cold water and slowly turn up the heat, the frog will eventually be boiled to death. Even though it could, the creature won’t jump to safety because it continuously adjusts to the temperature until it’s too late.

Fellow frogs, have you noticed the temperature is getting warmer? 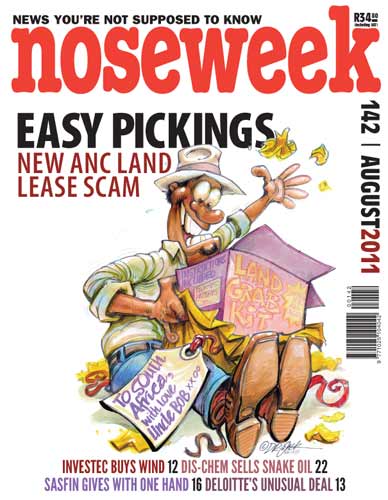 Goodness, quotes and parables can be morbidly seductive! No more of that!

Time to honour and take heart from the memory of the likes of Terry Herbst, outspoken Port Elizabeth city councillor and heritage activist  – and one of Noseweek’s earliest subscribers – who died at home on July 14 of a heart attack. He was 80 – although no-one would have guessed it, judging by the energy, tenacity and sharp wit he displayed up to the end.

It was Terry who long ago introduced us to the vagaries and all-too-frequent depravity of Eastern Cape politics.  But, despite the odds posed by that environment, he remained committed to the fight for truth and justice for all. We called him in the morning with a question. Death intervened before he could call back with his answer.

A long-serving member of the DA opposition in the city council, the praise most worthy of him came from his ANC opponents: Mayor Zanoxolo Wayile said of him: “I always regarded him with high esteem because he was honest and frank. He’s the one who’s been writing to me on a range of issues, and always follows through. It’s a sad loss for the city and for council.”

Acknowledging the “huge impact” Terry had made on civic affairs over many years, council speaker Maria Hermans said he had not been “an easy one” in council – but she would miss him. “I had on one occasion to put him out of council for two minutes...  Afterwards, on the same day, he came to me and gave me a good hug.”

There is still merit, it seems, in fighting the good fight. – The Editor