Catching up at last

Mr Nose has to marvel at our intrepid mainstream media. Back in 2009 (nose115) Noseweek broke the story of how a tiny, company called Valor IT quietly came  to be awarded a R153-million government contract to install an “enterprise content management system” at the Companies and Intellectual Property Registration Office (Cipro). (The system was supposed, inter alia, to help control corruption) Did any of the mainstream media pick up the story? Heck, no! Far too much chance of picking up a libel writ, and not PC to criticise a probably well-connected BEE enterprise.

Noseweek soldiered on, digging up fresh scandal on the affair in issue after issue. (nose117; 126;  127). It was only after nose127 hit the streets in May last year that Trade and Industry Minister Rob Davies felt he had to act. And on May 19 the mainstream media felt it could safely report his announcement that two top Cipro officials had been suspended for alleged involvement in the Valor affair, along with moves to cancel the whole contract. Duly cancelled.

Not so, protested Valor IT chairman Josias Molele. “He (Davies) is lying!” Molele told Business Report on February 5, releasing a letter from Valor’s attorneys Noko Inc, dated December 10, 2010, claiming the DTI’s legal team had proposed a R28.1m settlement with Valor, including R13.9m for wrongful tender cancellation.

Not so, responded Davies days later. The DTI lawyers had entered into negotiation with Valor, but director-general Tshediso Matona had considered the settlement terms un­reasonable. Despite repeated Valor-inspired media re­ports to the contrary, notably in the Sunday Independent, no settlement has been reached. 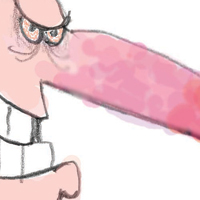 Meanwhile Mr Nose has been much entertained by his favourite sport: dog eats dog. In January, the High Court in Pretoria ordered Valor IT to pay R1.8m and two years’ worth of interest at 15.5% to Blue Turtle Technologies, which it had contracted to assist with part of the Cipro tender.

For whom the bell tolls

Last month The Star reported that the cost of the government’s contract to run the looming electronic tolling system on Gauteng freeways has soared from R1.16 billion to R4.56bn. Mr Nose is fascinated to see that part of the job – and a share in the spoils – has gone to Gijima, the technology solutions and services group headed by billionaire and one-time court interpreter Robert Gumede.

Readers will recall how Valor IT stole whole chunks of Gijima’s website for its own use (nose115). Gumede took it on the chin, voicing not even a bleat of protest, so desperate was he to keep out of the Valor/Cipro scandal, lest it reflect adversely on his own quest for lucrative government contracts.

He certainly didn’t want a repeat of the February 2008 fiasco when Gijima’s award of a R3.4bn tender to modernise Home Affairs’ identification system was delayed by 12 months after an investigation by the Auditor General found the criteria for functionality, price and black empowerment had been changed by unnamed people within the State Information Technology Agency.

As we reported, there were no allegations of wrongdoing by Gijima, although Robert Gumede’s reported R10m handout to the ANC’s election kitty raised eyebrows in relation to the awarding of government contracts. Gumede must be glad to see that his R10m is now to be repaid many times over by the obliging SA National Roads Agency Ltd (Sanral) in its latest scam to rip off Gauteng’s already beleaguered motorists.

Perhaps this latest handout will boost Gijima’s disappointing 2010 results (revenue down 2.4% to R2.9bn).