Books: Honesty in a world of secrecy

Will John le Carré sue Julian Assange for loss of income? After all, JleC has made a lucrative living out of secrets these forty-something years – and then, horrors, the entire cloak-and-dagger business goes phut. Assange’s WikiLeak revelations of recent months have surely put paid to the whole espionage industry, never mind the spy novel. 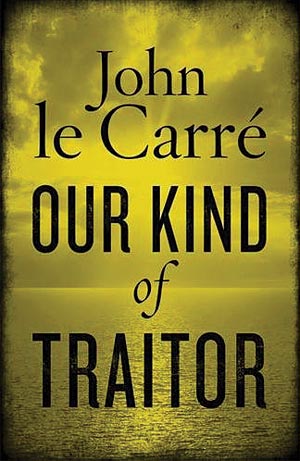 Well, no. We Le Carré fans know better than that. And our smug knowledge of his arcane world is confirmed and expanded in the urbane master’s latest – Our Kind of Traitor.

The wide-eyed innocents who imagined that public exposure of fragments from years of clandestine inter-governmental communications would launch a new millennium of sweet honesty in international affairs are in for a teeny surprise. If anything, spy versus spy action is likely to become much more, and much more dangerously, obscure.

Diplomacy does not reside in one-liners. Effective embassies keep up sustained conversations, which, all things being equal, tend to be preferable to actually ripping each others’ throats out. The old “jaw-jaw is better than war-war” theory.  So a rude or exasperated remark by a major player, possibly  significant, is also quite likely to represent nothing more than an aside in the face of endless bloody-minded chats with intransigent “negotiators”.

The envoys’ loss of faith in current methods of communication simply means that new techniques will have to be developed. And fast. Humanity, at every level, needs reliable confidantes.

Which is not to say that the Assange bombshell does not have its merits. On the contrary – the people who play the power games need to know that We the People are on to them. And will continue to keep a beady eye on their machinations insofar as it is possible to do so.

Le Carré’s genius lies in the combination of special knowledge of spookery (he was employed by HM Government in that department, and clearly knows his way around some very mazey corridors indeed) and his evident fascination with fallible humanity. The characters are memorable and sustained. Some are heroic without necessarily meaning to be so. Just like in real life.

He is particularly good at observing the terrible toll that realpolitik often takes on shiny idealists confronted by conflicting definitions of national interest. And he is a mesmerising story-teller.

Traitor is an exciting thriller. Highly intelligent, but always accessible, and essentially humane. The good guys tend to have a hard time – but then, t’was ever thus. There’s not much point in giving away the plot, except to say that it is smack-on-the-nose contemporary and would make a nail-biting movie combining, as it does, derring-do, romance, romantic settings, and foul villains, all of them convincing. There’s even a walk-on part for Roger Federer in a dramatic sequence set at the Roland Garros stadium in Paris.

Le Carré’s magnetic skills have been honed from impressive beginnings (The Spy Who Came in from the Cold and all that), but the compelling, non-preachy morality of  his writing  remains a powerful and unusual constant. Those who imagined that the end of the Cold War would stop his stately advance up the best-seller lists were soon proved wrong.

The appeal of every one of his novels is enhanced by a powerfully autobiographical element that flatters the reader with his confidence. And this is accomplished without special pleading. How curious  that a man moulded in secrecy, and clearly the soul of discretion, embodies personal honesty in his writings.

Roque trader
In January the Financial Mail named its 16 “hot” picks on the JSE for 2011. In ...
Dear Editor
Unhealthy procedure Wrong about copyright ...
Dear Reader: The art of image enhancement
This noseweek has developed into something of a theme edition: featuring the art of simulation ...
Melissa's added ingredients
Brand image is all: what the business says and does must reflect its image, failing ...
Arms and the little man
Mammoth US defence contractor Navistar Defense appeared in the Cape in September, pressing the flesh ...
The gates of wrath
Ornate gates and a 24/7-manned guardhouse cauterise the wealthy residents of this exclusive stretch of ...
The house that Pierre built
If you follow the local news you may well feel that the great and the ...
Beware bankers bearing gifts
Take your will seriously. Along with death and taxes, one other thing is certain: if ...
Slap-happy Eversheds cop slap in the face
The sheriff is poised to pounce and seize the Eversheds chairman's luxurious office furniture. And a ...
Losing Momentum
Last month’s noseweek might have left you thinking Discovery has cornered the market in crap ...
More fear and loathing at Rand Water
Are the investigative skills of Barry Badenhorst, the Clouseau-style head of group forensic services at ...
Political chameleon shows his colours
The controversial Gordon's Bay mover and political chameleon, Anton Fuchs, is back in the Democratic ...
Democracy dies in the darkness
One of noseweek’s (many) contacts in the legal fraternity kindly sent us a transcript of ...
Books: Honesty in a world of secrecy
Len Ashton reviews Our Kind of Traitor by John le Carré   ...
Misses v&k
Of course you don’t have to be sexually active to be sexually in love, and ...
Stent: Holiday
Educational trip ...
Classified Ads
PROPERTY FOR SALE LOCAL HOLIDAY ACCOMMODATION OVERSEAS HOLIDAY ACCOMMODATION ...