Feed them to the Hawks
The Hawks have at last begun proper investigations into the sale of Joburg’s parks (nose128), and suspension of employees in the deeds office, etc, has commenced.

Perhaps if certain people are offered a deal to turn state witness the real truth will come out.

On the other hand, mindful of Mr Moti’s ways of doing things with Abalengani properties (see noses 118,119,120,124,126&128), and with the financial backing of his friends at Investec Bank, it will not surprise me if Moti seeks the assistance of friends in really high places to white-wash these illegal property deals. After all, another guy in Durban (with brothers and other high-placed friends) managed to overturn the rule of law, or at least a legitimate sentence, in his corruption matters. I look forward to reading your latest instalment on Moti and his shenanigans.
William Smit
Pretoria

I hope you’ll keep digging on that Joburg property scandal you wrote about in your editorial last month (“Gill gets it done”, nose129). It occurs to me that, frankly, we can’t leave the digging up to The Star.
Murray Hunter
By email
Your wish is our command. SeeThe clerk who sold Joburg's parks in this issue. – Ed

Sharp design no solution
No matter how clever the design of the new South African passport (nose129), at the end of the day, if the people working at Home Affairs are dishonest, fraud will continue – systems are only as strong and secure as the people operating them.
Wayne van der Merwe
By email
True – and as our story suggests, there is already something not quite kosher about the new passport contracts. – Ed. 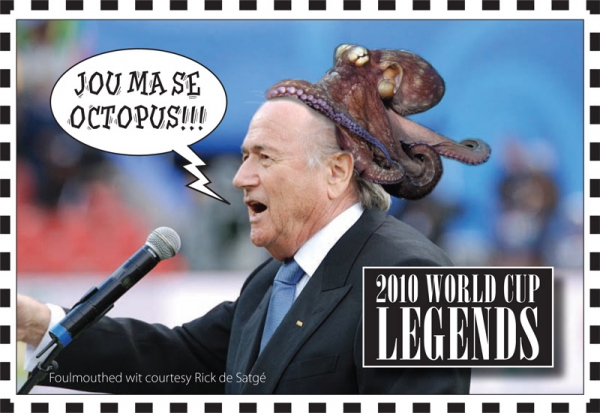 Life after Sepp
Ever since the jumbo on the cover (nose127) caught my eye, I’ve been a regular reader, and have eagerly absorbed all the dope on Herr Blatter and his scabrous bunch. With their track record, the question is: after all the shouting, the “vuvus”, and the beer and balls, who is going to pick up the tab – and what are we in for? What’s your forecast?

And now there’s talk of another Olympic bid! If I recall, it took a country the size of Canada years to recover the costs of just the Winter Olympics, and there is no doubt that hosting the Olympics made a significant contribution to Greece’s current financial woes.
Geoff Hamp-Adams
Port Elizabeth

Broeder politics must end “Hermanus forges ahead” (nose128) hit the button big time in this enclave of old broeder NP politics. Since then Mayor Byleveldt has gone to centre stage in the local paper, boasting, “Benefits abound”, referring to the Overstrand’s very secret property dealings with Rabcav (noses98,104,110&114). The Hermanus ratepayers have lashed back, challenging the spin and calling on the mayor to release the full financial details and the contractual manoeuvrings between the DA-led Overstrand council and Rabcav – information that has been withheld, unconstitutionally, for years.
Since then Terror Lekota has come to town to tell the local affluent (broeders) that if they wish to sleep safely at night, they will have to give more consideration to the less fortunate in our society. He went on to express shock that R30.5m has been spent by the council on the private Hermanus Golf Club – which was simply disgraceful of the DA.

The DA and their old-time Nat following have been put on notice: Cope has come to town – and municipal elections take place early next year.
John Williams
Stanford
See Terror takes the gap in this issue. – Ed

Our luxury cars are ethical
Your article about Cape Luxury Cars (“Point of No Return”, nose126) has inadvertently harmed even reputable companies in the luxury car rental business, as many customers apparently find it difficult to distinguish one brand name from another. Our company has been established for many more years and only practises good business ethics. We would appreciate the opportunity to point this out to your readers.
Antony Ashley
Status Luxury Vehicles
Cape Town
Our ad rates can be found on our website at www.noseweek.co.za – Ed.

Final liquidation orders were granted for the other companies that owed Absa the remaining R1bn but the brothers applied for leave to appeal to the Supreme Court of Appeal – which was rejected by Judge Hartzenberg.

Therefore, as they clearly think it is their constitutional right to steal as much money as possible – they have now appealed to the Constitutional Court.

The kicker is that because they are in liquidation Absa must bear the cost of the appeal.

Down with cell pirates
I, too, have had a drama with Vodacom about a flood of smutty smses with pornographic “content”, that kept popping up on my phone. I started at the Vodacom shop and moved on to their customer careline. But it was only after 20 emails and a call to the sleaze operator in London that I got it stopped, and got a refund of the “content charge” that appeared on my account.

The big question: How DARE Vodacom enter into an arrangement with some overseas scam artist, allowing their infrastructure to be used to expose their customers to smut and to rip-off charges that THEY (Vodacom) bill their customer, and then, when you object, say it is your problem and you must sort it out?

When will the minister of communications bring these bastards to book?
Ian Stewart
Knysna
Don’t we just wonder. But, then again, the ANC does have a fat wad of shares in Vodacom – and the party has never been shy of sharing in the proceeds of crime. – Ed.

Investec knows what you did last summer
Spies were paid to eavesdrop on clients and employees in a drama involving a R62m ...
Dear Editor
Hawks swoop in Joburg ...
Dear Reader: Investec earns its stripes
Once upon a time prison uniforms had black and white stripes. Dr Freud would have ...
UPDATES: Baby Michael: parents' trial resumes
It’s been close on seven years since Michael, then not quite three months old, was ...
UPDATES: Terror takes the gap
On Saturday 3 July, Mosiuoa “Terror” Lekota addressed a public meeting in Hermanus. At the ...
UPDATES: Council shows colours over Schulphoek
Deon Malherbe, who was so outraged that the Overstrand council was selling coastal land adjoining ...
The clerk who sold Joburg's parks
Joburgers tend to be a hard-bitten bunch, but the story that broke earlier this year ...
Going...going...gun
The mystery of the missing Mandela Makarov is in the news again. Amidst high security, plans ...
Hot, dusty justice
Which side of the law you're on in the Northern Cape comes down to whether ...
Barking Bismarck drives neighbours mad
‘Small town, barking dog’ stories don’t hit the headlines too often, do they? Yet sometimes ...
How to lose weight or die trying
The interesting tale of the slimming pill that was and isn't and may be ... They ...
Grand Daddy of PRcockups
Turning a PR triumph into a PR disaster takes some doing. But the Grand Daddy ...
Books: The Mandela behind the myth
Tyrone August reviews Young Mandela by David James Smith ...
No life for married men
Enough of this Jabulani kicking nonsense; while just about everyone else has been thrilled with ...
A life changed
The problem remains. If you’re one of those poor devils fishing for family protein it’s ...
STENT: Sepp
A special message ...
Classified Ads
Personal Legal, Insurance & Financial ...