John Lanchester’s Whoops! would be a wonderful piece of absurdist fantasy, were it not all so appallingly true. With sardonic humour, novelist and journalist Lanchester sets out on a modern day Gulliver’s Travels through the global investment and banking landscape. It’s a world turned upside down where bankers take theoretical models for reality and investors turn fantasies into piles of cash leading to ... well, you know how it ends. 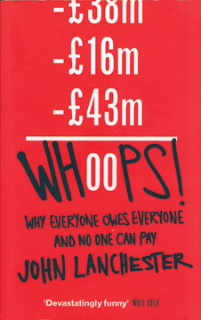 Instead of relying on old-fashioned assessments of risk, such as whether clients would actually be able to repay their bonds, bankers believed they had discovered a philosopher’s stone, which enabled them to turn base investments into gold, thereby defying gravity: what went up no longer had to come down.

They had statistical formulae to back it all up. The only problem was, there were precedents to show that the maths didn’t add up. For example, after the Black Monday crash of 1987, economists calculated that it shouldn’t have happened, that “had the life of the universe been repeated one billion times, such a crash would still have been theoretically ‘unlikely’.” Yet it did happen. These same mathematicians dreamed up the models that were going to protect the banks from large-scale defaults resulting from the reckless lending they’d been indulging in. We know how well that worked.

It is hard to imagine the sheer scale of the crisis. It will cost the US alone $7.76 trillion to bail its banks out – greater, says Lanchester, than “the cost of the Marshall Plan, the Louisiana Purchase, the 1980s Savings and Loan crisis, the Korean war, the New Deal, the invasion of Iraq, the Vietnam war and the total cost of Nasa including the moon landings – added together”.

How was something this devastating allowed to happen? And did nobody see it coming? Well it turns out they did. In 2002, Warren Buffett had likened the new financial instruments that played a large part in bringing the system down to weapons of mass destruction. He was doubly right, observes Lanchester, “because they are lethal, and because no one knows how to track them down”.

Although greed played a role in the disaster, it would be far too glib to lay the responsibility for the whole bang shoot at the feet of bloated bankers. Yes, bankers do deservedly take a fair amount of flak from Lanchester, but his analysis is way more nuanced than that, which is what makes this book so worth reading. Others in the cast include compliant politicians, half-asleep regulators and over-eager borrowers.

As he picks through the smouldering ruins wreaked by derivatives, searching for the origins of the crisis, Lanchester covers a vast amount of territory, making connections between intellectual, social and political developments over the last fifty years. This is a book that goes far beyond the dry details of the market. Indeed, one of Lanchester’s most telling insights is around the culture that made it all possible – the culture of the City of London and of Wall Street, which could see value only in that which was measurable: money. This culture, he points out, has inappropriately come to permeate everything over the last 30 years, from journalism to education and healthcare. Lanchester is not upbeat about the financial collapse, either: he sees signs that, far from being chastened, the bankers are already stocking up for the next party.

Dear Editor
The Fifa Famiglia If you really want to see how far back all the FIFA family ...
Dear Reader: Swag in the bag & Farewell Van
Swag is in the bag Early last month The Star reported in one of its late ...
The President, the Michelin Man, the tycoon and the ex-squeeze
Wheels within wheels. Find out how Jayzee's personal attorney, Michael Hulley, leant on scandal-prone billionaire founder ...
A litany of negligence
The Paarl Print fire investigators are hiding something - or they are incompetent, says expert. Richard ...
UPDATES: Gunning for The Liquidator
Loathsome liquidator Enver Motala is in the shit again. It’s also alleged that Motala allowed post liquidation trading ...
UPDATES: Fine tuning
Law firm Van de Venter Mojapelo Inc (VVM),has yet another line of similar business – ...
Gangster on the wing
To many, Wilf Rosenberg is one of the greatest rugby players of all time. Who ...
UPDATES: Court thwarts Mr Arniston's grubby little land grab
It’s a rare privilege to report on a case where the good guys win. So ...
NOTES: When Netcare didn't care
As the man lay dying in his wife's arms, the person on the other end ...
The real 2010 World Cup Winners
Having shagged his way through the female staff (as did Joao Havelange, his nonogenarian something-of-the-night ...
I didn't slash his throat, he fell on my bottle
Former St John’s College pupil Nick Louw is in hot water again in a case ...
Hermanus forges ahead
With Julius Malema doing “study” trips to Zimbabwe and Venezuela, there’s considerable white angst about ...
Offshore with sharks
Thinking of opening one of those clever overseas trust thingies that the bank says is ...
How trade cheats have cost SA $25bn
Banks can't staunch the outflow. Ongoing investigations uncover acts of fraud and corruption, SARS losing ...
Turning toxic debt into gold
WHOOPS! Why Everyone Owes Everyone And No One Can Pay by JOHN LANCHESTER ...
Death of me
Apparently I died one recent Sunday night or early Monday morning. What caused my death ...
Katkop
In making bread, he explained, you have to let it slowly rise twice, and each ...
Classified Ads
PRAISE SINGING The Fantastic Four  Michael, David, Rozanne & Alan. Appreciate all you do for me. ...
STACEY STENT: Socca Police
Balls ...