Waiting till the cows go home

Be careful what you wish for because you just might get it. I cannot keep count of the times I have told myself this over the past two months. First, it was what I have dubbed “the native problem” – caused by my “brothers from other mothers” (fellow brothers, my butt) – who went on the rampage and stole nearly every litchi from my 14 litchi trees. Then there were the monkeys, which freely helped themselves to the mango crop.

Then came Mother Nature who thought the Lowveld of my beloved Mpumalanga was getting too hot, and decided to cool us down with massive rains – with the result that my little farm road now looks like a replica of the Grand Canyon.

But get this: when I appealed to my Land Affairs project-manager to assist with funds to sort out the road, he tells me: “Bheki, when we asked you to give us a list of priorities for your farm you did not include the road. So at this point in time I cannot manipulate the budget to accommodate the road. You should have put it on the priority list.” “Well,” I say, “a few months ago the road was adequate, but the rains have made a bloody mess of it. For crying out loud, what you are saying would be like the UN disaster relief fund telling the Haitians they should have told them about the earthquake a year before it happened. How the hell was I to know we would be bombarded by such heavy non-stop rains?”

The exchange did nothing to address my dilemma. So through the Grand Canyon I plough, in second gear, praying I don’t find myself upside down in one or other massively terrifying ditch.

Is that all? you ask. The native problem, the monkey problem and mother nature’s wrath? Hardly. Every damn day, and especially on a Sunday, I have to transform myself into a cow herder. Oh the torture.

You see, my little holding, all 60ha of it (ha ha, viva land transformation), sits a stone’s throw from a trust community, two residents of which are cattle breeders. Nothing wrong with that, you say; those trusts were meant to allow the natives to maintain the native way of life. But no, there IS something wrong with that. Most trust lands are now covered by townships, with much of the land being cleared to make way for RDP houses. So these cattlemen neighbours no longer own grazing land, and their cows come streaming over to munch on my 60ha of bliss. And I’m talking about roughly 50 of them.

Each and every morning, before venturing out to take care of business, my loyal assistant and I must await the herd’s arrival and go running about, chasing the beasts off the farm. He whacking at them with a stick and me doing target-practise with an airgun. 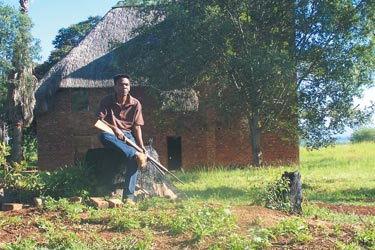 Now there’s plently of no-man’s-land surrounding my modest out-of-Africa settlement, but the herdboys who are meant to guide the cattle there don’t bother with that. Instead, the lazy bastards let the cattle out of the kraal and just let them to roam about wherever they please. Unfortunately my bit of Africa was unoccupied for a number of years and the bloody cattle got accustomed to venturing there. Oh, the torture.

Don’t get me wrong: I know the law of the land – I mean land as in farmland, not as in “the country”. I’m supposed to have the place fenced off. In partnership with Land Affairs, I’m busy organising that as fast as I can, and as soon as it’s erected the law will be on my side – the cattle will be deemed trespassing, and I can have them confiscated. So I’m also getting ready for a serious confrontation with those cattlemen. No ubuntu here. Keep the damn things off my land.

I’m particularly looking forward to getting Sunday back, it being my only free day of the week. It’s the day to do my laundry and kick back with the Sunday papers, whilst the washing dries in the sun. But kick back without worry I cannot – if even for one minute I didn’t keep my ears fine-tuned to the clanking of the cow bell, my washing would surely be chewed to shreds. Who would have thought cattle could have a taste for cotton shirts?

There I slouch on my throw-cushions with the Sunday Times and Sunday Independent, a cup of Java and a plate of eggs and toast (with strawberry jam; but sorry, no soft porridge – I am not one of those natives). And, of course, the trusty airgun at the ready. So much for kicking back.

And how did I come to endure such torture? I took advantage of the government’s land-transformation programme and applied for a piece of farmland, in order to develop a chili-sauce manufacturing business which was already showing such promise that, within three months of launching it, I was supplying Spar supermarkets in the Lowveld (yes, my talents go beyond being a scribe – thank you very much).

I got my wish, and certainly a lot more. At the end of the day I guess I’m grateful to be blessed with my own little piece of African paradise – which came to me without being a drinking buddy of Julius Malema. Yes: I can refer to myself as a son of the soil, with all its toil. One Afrikaner acquaintance put it best when he told me: “Welcome to the white man’s world.”