As the World Cup campaign builds orgasmically, courtesy of our star-struck media, a new consignment of Andrew Jennings’ sensational exposé of Fifa’s wicked ways is hitting the bookshops. Apparently the first paperback edition sold out quickly – not surprisingly. Word-of-mouth has it that the new consignment will also fly off the shelves. It’s certainly a dramatic read – a thriller, really. With all the right
ingredients: power, lust, greed and money, money, money. 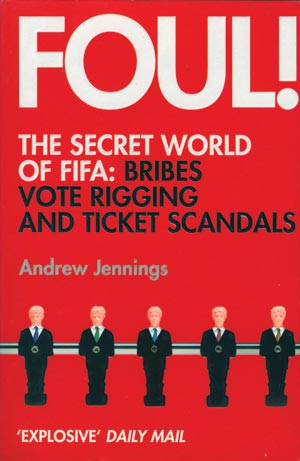 Do the good guys win? No. But as long as investigative journalism of this calibre is practised, there is hope. Foul! is disillusioning for those innocents who cling to notions of sporting idealism. But the political tendentiousness that has characterised the whole  South African World Cup campaign, with the dark hint that doubts will be interpreted as unpatriotic, has also bred a certain cynicism. Two minutes into Jennings’ page-turning, intensely researched style, and you begin to suspect your Standard Four egg-and-spoon triumph was probably rigged by your Ma. The likes of the current commercial manipulation of world sport have not been seen since Nero placed his bets at the Colosseum.

Even avid football fans are bristling at Fifa’s authoritarian approach to running the bread-and-circuses events planned for our controlled admiration. So, for the dissidents, it is comforting to know that the entire nation is not cooing in uncritical adoration of Fifa and all its works. The game is almost incidental in context of the vast commercial enterprise that is Fifa. Loose talk of bribes and blandishments paid to international political and sporting worthies, at all levels, is now confirmed in spades. And the irony is that this Byzantine empire of obscene riches is maintained by the keepers of the beautiful game.

Hand-on-heart types who have invested in such items as “must-have” Bafana shirts for officially prescribed Friday wear should avert their eyes from Foul! It would be heartless to subject true believers of the Fifa faith to the fearful truth. As bossy broadcasters inquire daily whether thee and me have invested in outrageously expensive Bafana tops (embossed with the prescribed correct branding), let us meditate on the happiness of the manufacturers who have signed the right contracts with the right people at the right prices.

Jennings recommends Pitch Invasion by Barbara Smit to “anyone who wants to learn more about how corporations took over world sport, trained its officials to be obedient and found intriguing ways to bribe them”.

The villain of the piece is the Lord of Fifa, Sepp Blatter, who apparently has ways of getting precisely what he wants. But fearless Jennings has him in his sights.

Half a colon is better than none

Mr Nose had a nostalgic chuckle when reading Alexander Maitland’s excellent 2006 biography of his old friend Wilfred Thesiger, the explorer and author of Arabian Sands, The Marsh Arabs and The Life of My Choice.

Thesiger, who briefly befriended Mr Nose in North Africa in the late 60s, died in 2003, aged 93. In his later years Thesiger suffered from cataracts on both eyes, Alzheimer’s and Parkinson’s. When additionally inflicted with cancer, and facing the removal of half his colon, his surgeon reassured him: “Better a semi-colon than a full stop.”