In this issue (Honey, Nedbank shrunk the shares) we take you into territory where few of us would venture voluntarily – the South African Futures Exchange. Why the need to go there now? Because some of its current inhabitants appear determined to sell our future for their own instant enrichment.

Suddenly it is vital to understand the basics of single stock futures – because it’s a scheme that’s been turned into a grotesque scam, by the likes of Nedbank, no less.

The bank has expressed no apology or shame for having broken just about every rule in the book in the process of (secretly) buying up 85% of the shares – more than a billion-rands’ worth – of an obviously disreputable listed company called Acc-Ross Holdings, as part of such a scheme/scam. Their purpose: to earn R150m in fees, free of risk to themselves – and regardless of the certainty that they would, in the same process, cause over R2bn-worth of damage to unsuspecting third parties.

So comfortable have they become in their life beyond the law that they ignored the JSE rule that applies to shareholders when acquiring more than 35% of the shares of a company, and violated the Banks Act, which says a bank must obtain the permission of the registrar before buying a business. Now the Securities Regulation Panel is to conduct a hearing on the matter because Nedbank might have violated its code on takeovers, and the Financial Services Board is probing alleged Nedbank manipulation of the Pinnacle Point Group share price. Pinnacle shareholders are suing for over R1bn in damages suffered as a result of Nedbank’s ramping of the share price; they have also lodged a complaint with the Competition Commission.

Nedbank’s dealings in Acc-Ross single stock futures cost rival Absa Bank R1.4bn, when it had to bail out the stockbroker on the other side of Nedbank’s trades. Clearly Nedbank believes it owes no-one a duty of care.

But here’s the curiosity: Absa is said to have decided, despite its R1.4bn loss, to “simply walk away from it all”. What are we to make of that? Have the banks become a tight little club, a “self-regulated body” that exists beyond the law, whose members are free to collude far more than has been suspected? A club, therefore, that under no circumstances would wish to invite non-members to view its collection of stamps?

Our law-enforcement agencies appear not only toothless; more often than not their bosses seem to have crossed to the other side. Even the registrar of banks acts like a card-carrying member of “the club”, when he dismisses the Acc-Ross affair as “a storm in a teacup”.

Are we to conclude that in South Africa only the sharks have teeth?

If you ever wondered how Fred Robertson (pictured below left) was able to acquire an option to buy a R200m chunk of prime Transnet-owned land for a mere R3.5m (nose125), then check out who he parties with (left to right): Minister of Finance Pravin Gordhan, Lion of Africa  CEO Adam Samie and Deputy Finance Minister Nhlanhla Nene. The four appeared in the Cape Times’ Society supplement, for which Lion of Africa paid R30,000. 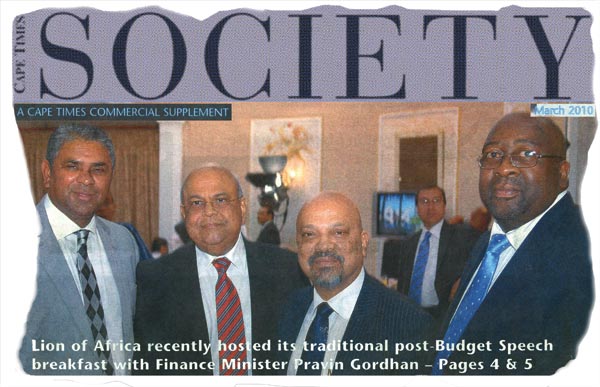