In boep you always get obsessive about something. What I got obsessive about was fairy cakes, with currants and a cherry on top. Being solitary and inactive I wrote a poem about them. In my head, that is, since I had neither pencil nor paper. In Chaucer’s English, to spread out the time a bit. 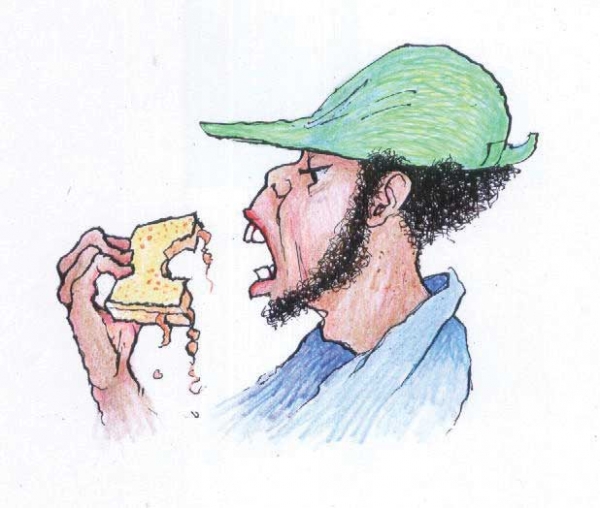 First day out of boep the Autumn morning sunshine is just too lovely. I remove my lappies hoed and ruffle up my hair to catch the breeze, and as I refocus my blinking eyes I see them before me, in the window of the ABC Bakery: a great heavenly mound, fairy cakes, yellow sponge, light caramel crust, everything, the small black shadows of currants and the glistening ruby cherry. I am transfixed. I’ll have half a dozen of the fairy cakes, please, I say to the pretty girl inside.  And a small carton of milk.

Of what cakes? says she. Fairy cakes, in your window there. She is dumbfounded.  She frowns. So I take her to the display of delight, and point. No, she says, smiling, those are boys’ cakes. Yes, say I, I want six, please. She frowns again. You can’t eat those, says she, they natov cakes, man! Ja, I say, I want six. For your boy? Sweet Jesus, what a country! Yes, I say.

She smiles affectionately, with nice white slightly crooked and very sexy teeth, and wrinkles up her pretty nose, and hands me the paper bag. Why didn’t you say so? she chuckles.

Don’t forget the milk, say I. They drink Coke, she says. Aah! Well a coke then, and the milk for me. What are you going to eat with your milk? she asks. Holy Mary, mother of Christ, think I, if this were a  man I’d give him a boot up the goolies. What would you suggest? I ask, smiling. OOO! says she, one of those, pointing to a huge sticky Chelsea bun about the size of a wicketkeeper’s glove. She loads this thing into another bag and I’m off salivating. Not about the glove.

Out in the dazzling sunlight I shield my eyes with my hand and there discern a natov leaning against a pole. I make my way to the other side of this pole and lean against it and ask him Howzit, umfo, could you manage this here great big bun and can of coke?  Gimme it! he cries. I fear he might bite my hand off. When he’s about halfway through and I’m on about cake #3 I notice the girl come out for her lunch break. She lays a fearsome scowl on me for the lying and the unapproved eating and I smile sheepishly, but she tosses her pretty locks and clicks off on her little heels.

Where are you from? I ask this bloke as I dust the crumbs from my shirt and he sweeps the last from his chin with his tongue, like a windscreen wiper. Botanic Gardens, he says.

Oh, say I, that’s where I come from; where in Botanic Gardens? Lanyon Grove, he says.

Don’t talk so daft! I say, how can you live in Lanyon Grove? Lanyon Grove is an A-group White Area; I live in Lanyon Grove.  What number Lanyon Grove do you live in?  Fourteen Lanyon Grove, he says. Are you bloody loony or what! I cry. That’s my address, stupid, that’s where I live! Ja, I know, he says, man, I live behind your house in the rubbish lane there at the back. Mr Johnson on the other side puts his dirt bins in the lane and lets me sleep in the place for bins.  He lets me shit in his servant’s toilet too if I clean his car every week-end. Also I watch it at night.

It occurs to me soon enough the Security Branch may have planted this dude in the garbage lane, but then surely they’d have nourished him up a bit, and how would they have known to lean him against this pole anyway? What do you eat, hey?, I ask him.  Quarter pears, he replies. Bread. Ja, my avocado pears, I suppose. From my trees, hey?  I dunno, he says.

He says his name is Eric, and I tell him mine is Jock. So what do you do for bread? I ask. I sell quarter pears says Eric. Ja, my quarter pears, you swine. First you sell my pears and then you eat my cakes.

Civil service pensions go down the drain
Government agency secretly wrote off a whopping R1.3 billion of civil servants' retirement funds to ...
Dear Editor
Flash, flesh Health uncare PIC ...
Dear Reader: Viral Greed / Radiation from across the waves
Viral Greed Radiation from across the waves   ...
Sold down the River
How come Transnet awarded an option to a company associated with Trevor Manuel's friend Fred ...
Nuclear proliferation
With talk that Eskom intends building at least three, and possibly six, nuclear reactors, critics ...
iBursting with ill-health
Families claim local Wi-Fi mast is making them sick. The Craigavon refuseniks have reason to ...
Unsafe as houses
Durban’s flamboyant and much-unloved city manager, Dr Michael Sutcliffe, will poke his nose into city ...
Dark night of SA horse racing
Night events have become a reality at Turffontein, despite strenuous objections from steed owners and ...
UPDATES: Smoke gets in the ASA's eyes
Why are e-cigarettes are being allowed to advertise without restriction, when the advertising of ordinary ...
Yes, it is a gun and No, I'm not pleased to see you
Tax adviser, Costa Divaris, has been accused of menacing his lover, Karen Ovis. Divaris has ...
War of the wall
Property developers seem to flout building laws by simply getting approval when the building is ...
Stripped bare by Momentum
Medical scheme, Momentum, gives client's confidential information to his boss. By revealing his medication his condition ...
BOOKS:The man who loved books too much
Ann Donald reviews The Man Who Loved Books Too Much by Allison Hoover Bartlett ...
Country Life: O, Baby!
Bonking with multiple partners is very much the norm in SA, as is the harsh ...
UPDATES:Open your wallet and shut your mouth
How do you trust caregivers who see you as a cash cow to be handed ...
Never mind
In boep you always get obsessive about something. What I got obsessive about was fairy ...
Classified Ads
PERSONAL Sal Don’t play leapfrog with the unicorn. Love Greg. To the two Maartens – goodlooking and ...
STENT:The Wives
Beautiful baby ...