HOW FAR WILL THE GOVERNMENT GO?

Many of those involved in Cell C’s bid for the third cellular operator licence have also featured in noseweek’s coverage of the arms deal, the Shaik brothers, Yusuf Surtee, and Lambert Moloi among them. And some in the government seem prepared to go to great lengths to make sure that Cell C wins the bid regardless of the merits. The judge in charge of the judicial review of the licence award was even heard to call Minister of Communications, Ivy Matsepe-Casaburri, a liar. He later withdrew the unguarded comment. But what’s going on? 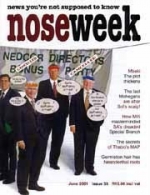 LAST WORD - HAROLD STRACHAN
Harold's restoration run-in with a very serious art teacher. ...
THE SPY WHO NEVER TOLD: part 4
The final instalment: Prof De Crespigny tells how he lied, first to UCT, then ...
FROM MI5 TO BOSS
Secret documents show that the British secret service, MI5, was deeply involved in setting up ...
MAP - THE WAY FORWARD FOR AFRICA?
President Mbeki’s ideal of the African Renaissance has been hyped like a white heavyweight boxer. ...
SUN INTERNATIONAL - SHAREHOLDER ALERT
Sol Kerzner tried one of his Bantustan-style deals with the Mohegan tribe and their casino ...
THE WILL OF AUDREY SIDEBOTHAM
Audrey Sidebotham was a great party gal, a generous spirit, with oodles of joie de ...
HOW FAR WILL THE GOVERNMENT GO?
Many of those involved in Cell C’s bid for the third cellular operator licence have ...
THE PLOT THICKENS
Just because the President is paranoid doesn’t necessarily mean there isn’t a plot. Steve Tshwete’s ...
Dear Editor
ON THE COVER Meet some of the Nedcor board members who approved the allocation of “phantom ...