Mushroomville. Well I think that’s what Eshowe means. But the name appeals anyway, as does the place, nestled amongst the sugarcane as Nieu Bethesda nestles among the koppies and kakiebos and folks go about making cement owls and famous vetkoek all day. You know, it’s that sort of place. Durban sucks, I’ll make a move... I do! It’s super! I find a modest little flat with a fine view of the cane. I pull in at the BBS Builders’ Merchants (Prop. R Tyack) for Polyfilla to tart up the bathroom a bit.

’Morning, Mr Tyack, say I. You’re under arrest, says a loud unlovely voice behind me, and there stands an armour-plated Bigfoot with ugly artillery buckled about his bum and NAIDOO above his right tit and a lady counterpart with SAMUEL above hers. Bloody hell, say I. Not you – him – says Policeperson Naidoo, pointing. Bloody hell, says Tyack, what for? Theft, says P/p Naidoo – Senior Superintendent Mathenjwa has instructed me to take statements from a certain customer and all witnesses and arrest you for refusing to hand to this customer goods which were paid for, but she said she would come back with transport but now she has lost her till slip and you say that is against policy because the world today is full of criminals. Well isn’t it? says Tyack. Yes but the customer came back again with an affidavit saying she has paid for the goods, and you still won’t give them to her, says Naidoo. What are the goods worth? I ask. R130, says Tyack, for some glass, window putty and cement. Cheez Crise say I. Well now he’s under arrest, Naidoo explains, to which Tyack replies Then I must phone my attorney Mr Adams from Messrs Wynne & Wynne who I’m sure you have heard of. Naidoo remains cool, takes statements from all in sight. Look, say I, all I want is some Polyfilla. But stick around, dear readers, this is only the beginning. These are early days. The plot thickens.

Attorney Adams on the phone asks to speak to Naidoo, who replies I don’t have to speak to anybody! Adams asks Tyack to get Superintendent Mathenjwa’s number and Naidoo gives him the charge office one.  On Adams’ instructions Tyack tells the cops there that this is a civil matter rather than a criminal one and the cops laugh at him, Policepersons Naidoo and Samuels make ready to shlep Tyack off to said copshop and Tyack’s control clerk Mr Joe Belcher suggests instead that Mr Naidoo sign a slip to release the valuables from the BBS store, to which Naidoo replies with some pomp: I don’t need a slip, I’m a policeman. He shoves Tyack in a van marked Anti-Hijack and along the way delivers a sermon on civil decency along with the pithy aphorism rubbish in, rubbish out – whatever that may mean – and declares he has half a mind to radio his colleagues to come with a police van so the world can see Tyack getting shackled hand and foot and know what a no-good sonofabitch he is. 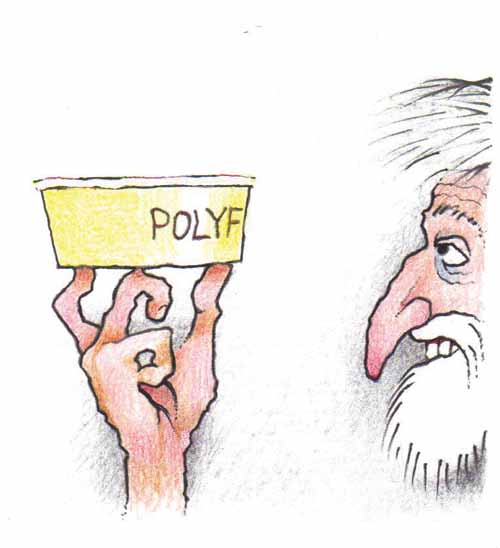 He sticks Tyack in an office at the copshop to wait for attorney Adams. Adams enters the superintendent’s office and emerges twenty minutes later shaking his head at the unreasonableness of the man who has declared Tyack must release the goods or get locked up and appear in court tomorrow. Tyack releases the goods and the police release Tyack and I go straight home to drink a cup of tea and phone Wakefield’s property management in Durbs and tell them please please not to let my flat there because I’ve changed my mind.

Now if you think you’ve had a bad time following this crap, dear reader, spare a thought for myself; I’ve had to scrape it out from the dingy corners inside my skull where ol’ Sigmund stuck it for purposes of Freudian forgetfulness. I happened to be passing through Mushroomville recently, see, and thought to pull in at BBS Builders to ask hoosit these days, and that’s how all this came to mind. Mr Tyack says he lodged a complaint with the Independent Complaints Authority, Eshowe, after the above events back in 2007. Policeperson Stephan van Vuuren came to take statements which he would send straightway to the Authority, but the station commander SAPS Eshowe won’t speak about the matter, nor will the regional director of the Independent Complaints Directorate, Durban.

Meanwhile my home back here in Durbs has got a bit unkempt. I pull in at Wardkiss Hardware for Polyfilla. Polyfilla? say I to a bloke with a cloth badge over his left tit saying SONNY. This way, Sir, says Sonny, but may I remind you that unused Polyfilla hardens very soon in its tub, I suggest you try plaster of Paris mixed with ordinary wood glue instead. That is most helpful of you, say I, and efficient. You have to be these days, says Sonny.

O, Tannenbaum
The gold waren’t in them thar pills. How Barry Tannenbaum and Dean Rees exploited the rich ...
Dear Editor
Reinvention of Hromnik ...
Dear Reader: Hallelujah! Nedbank gets into the spirit
It’s Christmas, and, in the spirit of good cheer, Mr Nose has a small item ...
NOTES: Cattle baron's restaurateur's beef with Absa
When Vic da Silva applied to Absa for a R2.5m loan to start a Cattle ...
UPDATES: Bullying Samro loses court battle
If you cherish free speech (if you don’t, you’ve probably chosen the wrong magazine), you ...
Grapeseed muti adverts give newspaper reader the pip
Procydin is a pretty wonderful product. But can miracle pills really cure all known ailments? ...
Mr Nose: Games people play
Back in February 2006 Mr Nose put it about that Old Mutual had shamelessly been ...
New hazards on Arabella
These greens are becoming politically treacherous and the department's advice clearly pointed to bias. ...
Doctatorship
There’s an interesting debate going on in the world of medicine. The government has seized ...
That mad woman
Being an environmentalist in Kenya is a political hot potato very few would want to ...
Sociopaths stole my farm
A retired Scottish aircraft engineer, now facing financial ruin, has learned the hard way how ...
City Capital winds up in court
As a result of a bitter behind-the-scenes battle to gain control over the R300m property ...
Lawyer's negligence gets him off the hook
Here’s something that will make the legal profession sit up and take notice. Slaps on ...
Engineer's shock R275,674 internet bill
MWEB has taken a Cape Town helicopter engineer to court about an astonishing R275,674 cellphone ...
Trapped in Pollsmoor
As a nine-year-old girl, she survived the 1994 genocide that saw nearly a million of ...
Country Life: The booze brothers
Every once in a while you get a story that simply makes you pull out ...
Mushroomville
If you think you've had a bad time following this, dear reader, spare a thought ...
Classified Ads
PERSONAL To Roy, happy birthday from Terry and Dawn and Ebony. To the love of my life, ...
Stent: Help Line
The President is in ...