Being an environmentalist in Kenya is a political hot potato very few would want to touch. Professor Wangari Maathai, the 2004 Nobel Peace laureate, has experienced it all; she has been publicly humiliated, teargassed, whipped, arrested and detained. Former Kenyan president Daniel arap Moi called her “that mad woman”.

But Prof Maathai is anything but mad. One only needs to read her memoir Unbowed, and her latest book The Challenge for Africa to appreciate why the Nobel committee decided to honour her five years ago.
In 1989, at the peak of Moi's autocratic single-party control of the country, she was the lone voice that dared oppose his infamous roadside declarations. Most memorable of all was her protest against Moi's planned raiding of the historic Uhuru Park in Nairobi, the country's largest public park. 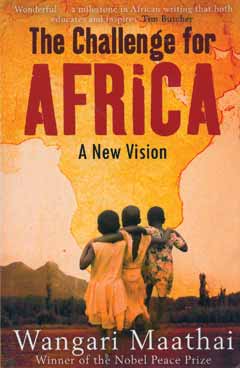 Moi’s party, KANU, had intended to replace the park’s greenery with a 60-storey skyscraper and a massive golden statue of Moi. At a time when any form of opposition against Moi's leadership was a treasonable offence punishable by death, Prof Maathai refused to be cowed. For the next three years Maathai led public protests to the park, bombarded the project funders and developers with letters, endured death threats and repeatedly landed in jail.

It was during the Uhuru Park protests that Moi called Maathai “that mad woman,” and went on to remind the professor of her place: “According to African traditions, women should respect their men. She has crossed the line.”

Maathai stood her ground and Moi finally caved in under international pressure. Uhuru Park has remained one of the most beautiful on the continent.

That event was an eye-opener and Kenyan political activists realised it was possible to oppose bad leadership and began a quest for a multi-party democracy.

Prof Maathai (69) knows Kenyan politics can be tumultuous – but even she was shocked by the violence that followed the 2007 general election, when supporters of various groups went on a butchering spree. She argues in The Challenge for Africa that it will take more than agreeing to coalitions to heal Kenya, or the continent.

In the book she explores many problems facing Africa, from unfair trade policies to global warming and tribalism.

She told noseweek that, while it’s extremely important for Africa to learn to respect the rule of law and not change constitutions midstream to fit the political persuasion of the moment, root causes must first be addressed to stop the dangerous trend of leaders preferring to form coalitions rather than
accepting defeat in elections.

The situations in Kenya and Zimbabwe vindicate what Maathai has preached to deaf ears for years – the linkages between the environment, peace and good governance. In the absence of democratic governance and sustainable environmental management, natural resources have often been the source of conflict in African countries.

In this book she gives the example of the impact of the introduction of private land ownership into Kenya, which caused animosity between Maasai herders, who need expansive land to graze cattle, and Kikuyu farmers, who for the first time owned title deeds and began marking boundaries.

“The book is a reflection of three decades of working in Kenya trying to do things the right way, and trying to persuade the leadership to be accountable, to distribute resources equitably, respecting human rights and rule of law. I was challenging Africans to think outside the box and begin to see why we are not moving forward, to realise it is only we who can liberate ourselves from the challenges we face,” says Maathai.

She attributes the complexity of some of the issues to the baggage Africans bring on board, such as the effects of colonisation and tribes – which she refers to as “micro-nations”. These issues have a lot to do with how resources, politics and economics are managed in Africa.

Maathai sees the modern African state as a superficial creation, consisting of a loose collection of ethnic communities or micro-nations, brought together in a single entity, or macro-nation, by the colonial powers. Consequently, most Africans identify with their tribe, and not their country.

She proposes creation of initiatives that bring communities together, foster dialogue, and achieve long-term reconciliation, to allow Africans to rise above competitive and often petty politics at the level of micro-nations, and to address the pressing larger issues confronting the continent.

The book is dotted with very effective metaphors, such as the traditional African three-legged stool which Maathai uses to explain that every country must embrace three basic principals or pillars: environmental sustainability, a democratic system of governance and a culture of peace. Unless these are all in place, no development can happen – no matter how much funding is advanced in the form of aid or loans.

Unfortunately this is not the case in most African countries, prompting Maathai to call for the adoption of an integrated approach to development.

Another crucial component for achieving meaningful development in the continent is through electing a new breed of “selfless” and “visionary” leaders. So where are these leaders?

“Countries worldwide haven’t been brought to where they are by some miracle. Africans must find people who can commit themselves to the welfare of the African people. They are there, but unfortunately many of them are killed or not given opportunity, or thirdly, the population continues to be persuaded through bribery and corruption to support uncaring leaders. Ordinary Africans must also rise up and hold their leaders accountable. That’s what has happened in many parts of the world, why can’t it happen in Africa?” 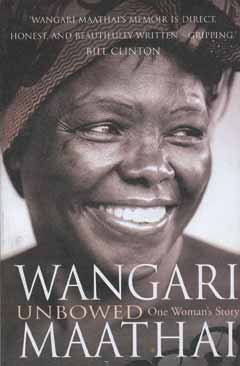 Five years after winning the coveted Nobel award Maathai is still sidelined in the running of Kenya’s affairs, as in the biblical example of a prophet who was not appreciated at home. She wonders why the Kenyan government shows little appreciation of her feats, which led to the writing of her memoir Unbowed.

Unbowed details challenges she faced as an intelligent, outspoken and strong woman in a country that hid behind tradition to justify intolerance of anything but “quiet girls”. She was the first Kenyan woman to earn a PhD in biology, yet suffered professionally; she had to fight for equal pay and to be taken seriously by her peers.

Maathai also had to endure a humiliating public divorce. Former husband Mwangi Mathai (Wangari added an “a” to the name after her divorce) expected her to be submissive and obedient and fake failure – which she refused to do. He filed for divorce claiming “she was too educated, too strong, too successful, too stubborn, and too hard to control.”

“With every court proceeding, I felt stripped naked before my children, my family and friends. It was a cruel, cruel punishment,” she writes. “I was being turned into a sacrificial lamb. Anybody who had a grudge against modern, educated and independent women was being given an opportunity to spit on me. I decided to hold my head high, put my shoulders back, and suffer with dignity: I would give every woman and girl reasons to be proud and never regret being educated, successful, and talented.”

Kenya has less than two percent of forest cover remaining, and large chunks of forests have been allocated to squatters, grabbed by politicians or awarded to sycophants. Maathai sketches the almost insurmountable work that went into establishing an extensive rural network under the Green Belt Movement, whose objective was to stem the rate of de-forestation while improving the lives of rural women by paying them to plant and tend trees.

According to Maathai, rewarding individuals with land goes back to the era of British colonialists who grabbed the most productive agricultural land in Kenya. The practice has survived two regimes and even today public land is hived off for personal gain.

O, Tannenbaum
The gold waren’t in them thar pills. How Barry Tannenbaum and Dean Rees exploited the rich ...
Dear Editor
Reinvention of Hromnik ...
Dear Reader: Hallelujah! Nedbank gets into the spirit
It’s Christmas, and, in the spirit of good cheer, Mr Nose has a small item ...
NOTES: Cattle baron's restaurateur's beef with Absa
When Vic da Silva applied to Absa for a R2.5m loan to start a Cattle ...
UPDATES: Bullying Samro loses court battle
If you cherish free speech (if you don’t, you’ve probably chosen the wrong magazine), you ...
Grapeseed muti adverts give newspaper reader the pip
Procydin is a pretty wonderful product. But can miracle pills really cure all known ailments? ...
Mr Nose: Games people play
Back in February 2006 Mr Nose put it about that Old Mutual had shamelessly been ...
New hazards on Arabella
These greens are becoming politically treacherous and the department's advice clearly pointed to bias. ...
Doctatorship
There’s an interesting debate going on in the world of medicine. The government has seized ...
That mad woman
Being an environmentalist in Kenya is a political hot potato very few would want to ...
Sociopaths stole my farm
A retired Scottish aircraft engineer, now facing financial ruin, has learned the hard way how ...
City Capital winds up in court
As a result of a bitter behind-the-scenes battle to gain control over the R300m property ...
Lawyer's negligence gets him off the hook
Here’s something that will make the legal profession sit up and take notice. Slaps on ...
Engineer's shock R275,674 internet bill
MWEB has taken a Cape Town helicopter engineer to court about an astonishing R275,674 cellphone ...
Trapped in Pollsmoor
As a nine-year-old girl, she survived the 1994 genocide that saw nearly a million of ...
Country Life: The booze brothers
Every once in a while you get a story that simply makes you pull out ...
Mushroomville
If you think you've had a bad time following this, dear reader, spare a thought ...
Classified Ads
PERSONAL To Roy, happy birthday from Terry and Dawn and Ebony. To the love of my life, ...
Stent: Help Line
The President is in ...