If I were a woman I’d hate to be called a babe. I’d hate even more to be called a chick. A reasonably dof babe stands a chance of becoming a reasonably dof woman, I suppose, but a chick can become somebody’s din-dins or an ingredient in a tin of catfood, and that’s it. And if I were a full-grown female H sapiens of purpose in this life I’d hate like anything to be called a girl – like my brain had got stuck at the age of ten or something, and the only parts of my 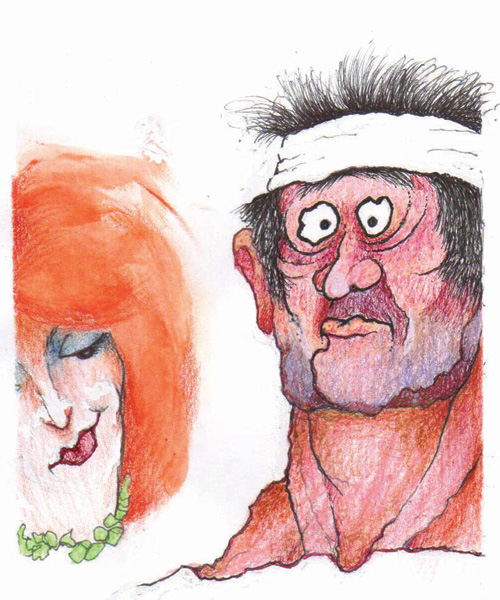 person to develop into adulthood were my you-
knows. Then even in this day and age, as they say, there’s this bloke called Fihlokwake Mkize who is employed as flatboy round here to clean the twelfth floor windows without falling to his doom, and he says to me from outside one day, he says, I am now fifty years old, do I have to wait ‘til a hundred before I get called a man?

Well, it’s all very complicated, see. I mean there’s this mystique about being one of the boys (++ male) or a window boy (– gender) or a girl (hominid dishwasher in pink PnP maid’s uniform) or a girl as visually defined in that telly advert for some machissimo poker paradise where all this mindless crumpet stalks round and round a swimming pool clad in naught but three samoosa-shape minimal bits of cloth with strings and fifteen centimetre stiletti under their heels, and smile with all 64 teeth all day. And what cause do they have to smile?  Why, there’s this ou with sufficient IQ to breathe and take nourishment and he’s in a sort of gym where he declares that he wins his friends, and demonstrates this by seriously thumping around with his fists a number of great big men. Also he wins his girls, which he emonstrates by sitting at the above pool clad in but one minimal samoosa with strings plus a white vest, and he’s covered almost entirely by wriggling giggling pink female flesh until you start to feel maybe you wouldn’t mind seeing somebody with some clothes on. Finally he declares he wins his poker too, and there you see him with some clothes on scooping up a huge mound of chips with his huge hands in this gambling hell, most other men being still unconscious. End of advertisement.

Every showing brings to mind a similar ou I knew, name of Buks, back in the days when I taught figure drawing to senior graphics and fine art students, three hours a day, five days a week. Fifteen hours. A lot of studying the human body, that, and I always stressed good drawing is more what you do with your eyes than what you do with your pencil. Then one day the model agency phones to say they have a very sturdy suntanned and oiled body-builder signed on, and would we like a male model for a change? Why not? chorus the students, why do we always have females?  Because in my experience men like talking big about all the babes they shag, say I, but when it comes to standing revealed in every detail with people studying every detail they go all kind of silly and get... well sort of... you know... out of shape. As it were.

Never to worry! cry all, we’ll let him wear his underpants! And anyway, say I, body-builders don’t know how to look graceful, they’re always pumping up their monstrous muscles for the cameras. We’ll relax him! they cry, we’ll tell him to shut his eyes and go dreamy!

So okay, we sign him on if the agency tells him he mustn’t oil himself all over to make his muscles shiny and he must wear his underpants. Two pairs, just to make sure, because of the majestic musculature. The students explain to him he is here to show the human side of things, he should just close his eyes and relax as when sleepy. So he does that, he’s doing fine, but then quite slowly at first, he... he ...starts showing the animal side of things, I mean he slowly gets... gets... he gets... OUT OF SHAPE. All drawing stops. All fall quiet, all are motionless, as hypnotised. I fear some sort of Hindenburg crisis pretty soon.
Okay all, I declare, break for a cuppa.

No no! cry all, we’ve just had one! Further hypnotism. Then after a bit a lad called Billy says to his partner: I don’t know, Baz, says he, I’d have expected better than that, and other side of Basil a wild flame-headed creature called Daisy Pegg declares Yes, I’ve seen better in my time, and ou Buks slowly slowly gets back in shape and the drawing resumes as if nothing has happened.

Bi-m-by Buks comes for his money. Hey sorry man, says he. That red-hair babe was undresseen me wif her eyes. Yes, say I, that’s what I teach them. That’s art? says Buks. That’s art, say I.

Who's on Tannenbaum's ponzi laundry list?
Forensic investigations into the cash flow through the ponzi scheme for millionaires conducted by Barry ...
Dear Editor
Out to lunch with a cash-filled envelope ...
Dear Reader: Blind as bankers &A time to prey - and a time to pay
One of the recurring questions people ask about Barry Tannenbaum’s ponzi scheme is: How come ...
Questions to Siemens
Following the October noseweek report on how bribery and corruption became entrenched business practice at ...
UPDATE: Kiss and no tell
Three months ago nose118 pondered whether the romance between Renee Silverstone, chief executive of The ...
UPDATE:Court halts Baby Michael trial
After six long years, the attempted murder trial of Baby Michael’s parents finally started last ...
Island of shifting sands
Architect Abdulghani came up with 'a wonderful deal' with the free trade zone authority, through ...
Into the valley of stench
An Addo orange farmer is creating a mammoth stink in the neighbourhood with putrefying chicken ...
Devil in the detail
The thief in your pocket (see nose118) is still there. Huge money is at stake, ...
What's in a name?
The Appeal Court has had to deal with a lot of intellectual property (IP) of ...
Vuyo's leap in the dark
A grade 10 pupil lost his right leg after jumping from a first floor parapet ...
The ethical face of SAbanking
Cathy's R4,800 loan will cost her R41,780 ...
How to engineer your own private professional body
The internet makes everyone and their dog a publisher. Liberating, yes; but the net provides ...
Country Life: Burning Anger
Oh Oh Oh. That old saying “When chickens come home to roost” is sure being ...
The aid malaise
Gerald Shaw reviews Dead Aid:Why aid is not working and how there is another way ...
That's art
The model agency phones to say they have a very sturdy suntanned and oiled bodybuilder ...
Smalls
Find it here ...
STENT: Trevor 1
My piston has a longer stroke ...