In 1998 American airline executive Coleman Andrews rode in like the fifth cavalry to rescue SAA. Now he’s sneaking off early, the way he said he never would. And, we now discover, like he did just before the previous airline he headed collapsed. He’s also ducking our questions: and there’s so much we wanted to know. For instance: what exactly is his relationship to the consulting firm Bain, that gave SAA such lousy - and expensive - advice which resulted in the airline spending a sweet $600 million on unsuitable and outdated Boeing 737-800’s? Was the big yank yanking the chain of our national airline? 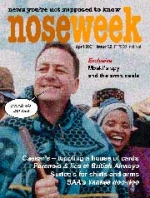 LAST WORD - HAROLD STRACHAN
Harold's true angling story. ...
PR WATCH Part 2
Public Relations blokes specialise in things like portraying the clear-cutting of ancient indigenous forests as ...
CAESAR’S CASINO - TOPPLING A HOUSE OF CARDS
After many years of building up his playing card business Harry Roscoe was looking at ...
THE SPY WHO NEVER TOLD: part 3
De Crespigny undergoes the fight or flight spy test. ...
PARANOIA AND LIES AT BA.
We’ve all heard about the British Airways London to Kenya flight that came within seconds ...
THE SPY WHO'S OUT IN THE COLD
It was Thabo Mbeki’s man, Essop Pahad - today he’s Minister in the Presidency - ...
MASTERBOND Part 2
Masterbond victims were abandoned by the SA financial establishment, which had had its snout deep ...
SAA’S YANKEE DOO-DOO
In 1998 American airline executive Coleman Andrews rode in like the fifth cavalry to rescue ...
YUSUF SURTEE FOR SHIRTS - WITH ARMS
Denel paid R100 million bucks into a Swiss bank account for ‘advance commissions’ on a ...
dear reader
This editorial, concerning an alleged secret meeting between high level government officials to discuss ways ...
Dear Editor
Re Arms and the Man (nose31). A perfectly good story ruined by your inability to differentiate ...