Can Zuma pull it off?

As the Zuma Presidency begins, his conciliatory and reassuring style is calming the troubled spirits who have been wondering what the future holds. Yet doubts and reservations about the man remain, with good reason.

Two rather different books just  published illuminate the recent South African past and suggest possible outcomes. Both books tell much the same story of the decline and fall of Thabo Mbeki, and both are useful aids to understanding. Financial Times correspondent Alec Russell gives a concise and lively account, judicious in its judgment of the Mbeki years. The tale told by RW Johnson, an Oxford academic turned journalist, is long, gossipy and insightful and not always judicious. 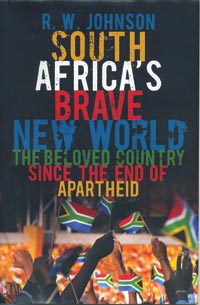 The English-language newspapers led the cheering when the Mbeki presidency began, and many journalists, including the present writer, gave Mbeki an easy run for rather too long. Because, under Mbeki things began to fall apart. By 2006 an estimated three quarters of a million whites had emigrated, most of them between the ages of 20 and 40. Many were skilled workers or professionals; many cited crime and affirmative action as reasons for going. AIDS deaths multiplied. By December 2000 the Cape Times was declaring that South Africa’s quiet diplomacy on Zimbabwe had failed.

Archbishop Tutu was among the first to note that a stifling conformity of thought had taken hold of the ANC, and was infecting wider society. When Jeremy Cronin, a courageous intellectual and a senior SACP leader, spoke out against Mbeki’s Zimbabwe policy, he was sharply whipped into line.

Mbeki, using “deployment” as a tool of control of the ANC, the public service, the SABC, and parastatals, increasingly took power into his own hands. The fear of falling foul of Mbeki became pervasive in the ANC. In the country at large his racial nationalism became apparent as the hasty, ill-considered application of affirmative action took its toll in the loss of skills, poor service delivery and politicisation of the public service.

The ANC had always been a broad church in which lively discussion between liberals, nationalists, Christians, muslims, and communists had been the norm. Mbeki’s oppressive leadership style was stirring up acute resentment inside the movement.

A tolerant non-racialism had been the dominant culture of the United Democratic Front, the ANC’s surrogate on the home front, which played a significant part in bringing about change. Yet the UDF was smartly disbanded by the returning exiles, led by Mbeki. Cyril Ramaphosa, a potential rival, was “deployed” into business. Ramaphosa and two other leading internal activists, Mathews Phosa and Tokyo Sexwale, were accused of conspiring against President Mbeki in a “plot” to oust him. The allegations were baseless and had to be withdrawn. Phosa and Sexwale, at the time premier of Gauteng, followed Ramaphosa into business.

Eventually a corrupt, faction-riven ANC began tearing itself to pieces. Finally, at Polokwane, Mbeki, to his astonishment, was ousted as ANC president, and subsequently “recalled” as president of the Republic.

This in broad strokes is the story told in these two books. The success of the Mbeki presidency’s macro-economic policies had at first masked the potentially disastrous impact of the man’s divisive racial nationalism. At home and abroad, his standing remained high – until his AIDS denialism, the Zimbabwe tragedy, out-of-control crime and over-hasty affirmative action began to strike home.

But what finally cooked Mbeki’s goose in the ANC was his ruthless, autocratic management style. The ANC-in-exile had absorbed from Moscow more than just the rhetoric of Marxist revolutionary economics. They had also been profoundly influenced by Lenin’s doctrine of “democratic centralism”. Marxist economic policy was abandoned by the ANC after the fall of the Berlin Wall. But the influence of Leninism remained pervasive in Mbeki’s strict top-down style, inhibiting broader discussion in the ANC concerning differences of approach to policy and its implementation. Russell’s account is an authoritative survey of the Mbeki years, recognising Mbeki’s positive achievement as well as his crucial failures. Russell had come to South Africa to cover the Mandela presidency. He was at first very impressed with Mbeki and the ANC. On his return in 2007 he found that the rainbow nation had lost its sparkle. As a seasoned Financial Times correspondent, Russell doesn’t sound all that convinced that the country will come right. He sees South Africa entering a new age of uncertainty and finds that the ANC, after 15 years in power, is losing its way.

RW Johnson had, from the start, a pretty jaundiced view of the ANC, and of Thabo Mbeki. As a former man of the left himself, he no doubt knew his Lenin. Like Tony Leon, also castigated at the time for his abrasive anti-ANC stance, Johnson can now claim some kind of vindication.

Less inhibited than Russell by claims of fairness, Johnson lays into the ANC and some of its key figures, such as Kader Asmal. He acknowledges Mandela’s moral stature, but belittles him as politically naive. Archbishop Tutu, and the Truth Commission, he treats in scathing fashion – although at the same time he does use the TRC report as a handy source for hammering the ANC.

Will Zuma fill the leadership vacuum? Writing from the perspective of the end of the Mbeki era, Russell and Johnson can only give limited impressions. 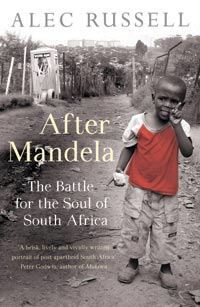 Russell sees him as an authentic African leader, a man who listens to his people and understands their concerns, and does not necessarily let the niceties of Western political convention stand in his way. Zuma is engaging and mellow, in contrast with Mbeki’s chilly, remote public persona, but the populist Zuma is inclined to say what his audiences want to hear.

Noting Zuma’s impressive record as a peace-maker in KwaZulu Natal, and elsewhere, Russell says that Zuma also knows when to jettison diplomacy. “There is a steely fist under a velvet glove.” But, in view of his own embarrassments over his relationship with his financial adviser, would Zuma be strong enough to lead on issues of good governance?

And how will he resolve the differences in the ANC over economic policy? After all, he won the leadership of the ANC with the support of the SACP and the unions, who want a shift to the left and an end to Mbeki’s business-friendly policies.

Russell concludes that if South Africa is lucky, Zuma will be its Ronald Reagan. He will make the country feel good about itself and leave the business of governing to technocrats. There is another, less reassuring scenario, however: the growth of a “Big Man” personality cult that will mask the country’s growing social and economic problems.

Russell feels that the chances are slim of Zuma being able to curb the growth of crony capitalism, as spawned by BEE. Johnson pursues a similar theme at length, but also singles out the corporate giants for blame in the BEE fiasco. Much of the initiative for BEE lay in corporate hands, he argues. The big companies were keen to prove their own progressive credentials, he says, by selling off assets to empowerment partners. As Johnson sees it, this was often also a cover for a policy of disinvestment and diversification abroad, with Anglo-American leading the way.

Russell does not see Cope and the DA seriously threatening the ANC’s hold on power. The ANC will be in charge, he says, and it is the ANC that will have to change, a verdict with which Johnson concurs.

Russell concludes that unless the ANC can change direction it will find itself, in a decade or so, presiding over a sclerotic dysfunctional state.

Johnson’s 650-page blockbuster  relies very heavily on newspapers, and the Mail & Guardian in particular, to give a densely detailed  account, crammed with interesting and sometimes alarming facts and figures. He is an adventurous and immensely readable writer – he says, for example, that the still unsolved assassination of Robert Smit and his wife was ordered by then State President Dr Diederichs. Johnson names the assassin, and claims he was subsequently murdered for his pains.

The main thrust of Johnson’s book, however, is a devastating account of ANC misrule under an insecure, paranoid Thabo Mbeki, who Johnson sees, not without reason, as presiding over a sort of institutional implosion. The broken-backed state and the abysmal quality of governance need not be fatal, Johnson argues. But he believes that South Africa can only work as a multi-racial country.

If the ANC would revert to its non-racist tradition it would employ human resources on the basis of merit, regardless of race or ANC connections. This would be fiercely resisted by the black elite, which has come to feel that it has a natural monopoly of all leading positions in the public sector, he says. But the ANC, with its huge majority, could easily face down such complaints, Johnson believes. And the interests of all, including the poor and the black middle class, would be better served by public institutions and service delivery that worked.

The general conclusion indicated by these two books is that if the ANC does not change direction the future does not bear thinking about. My own feeling is that reform of the ANC is certainly possible, given time and courageous leadership. Whether Jacob Zuma is the man to provide it remains to be seen. A quiet but determined shift in the direction of a professional, non-political public service would be a good sign.

Zuma’s Cabinet appointments and re-structuring plans indicate a good beginning, by and large, stripping out dead wood and making imaginative yet appropriate appointments across the ideological spectrum. There is much to suggest that Zuma means business when he says he will not tolerate laziness or incompetence.

SA's mall shakeout
Tenants can't pay the rent and investors stand to lose their money as the commercial ...
Dear Editor
Cover hijacked Disgusted Healthy advantage ...
Dear Reader: Stormy weather
Want to know which way the wind blows in South African politics today? Whether to ...
No free lunches (or listings)
Beware directory publishers bearing apparent gifts ...
DA sits on Gordon's Bay cemetery report
Are there indications of 'financial generosity' on the part of developers? ...
Paradise Lost
What seemed like a dream holiday house development in Mozambique has turned into a nightmare. ...
Update: Noorjehan Abbass
Noseweek has previously described the story of Cape attorneys, Fairbridges, and the serial thief they ...
The Kebble Art Auction - There's gold in them thar oils
Brett Kebble, alert to self-enrichment opportunities, may have gutted the JCI art collection treasures and ...
Out damned mine!
An entire community on the Cape West Coast has united to fight plans for an ...
Mielies and megalomania
Seed companies, like banks, are willing to take insane risks in the pursuit of market ...
Where there's a will, there's a way
Armed with an administration of estates diploma from Unisa, Sue-Ann Lazerson is rejoining battle to ...
Can Zuma pull it off?
Gerald Shaw reviews two recent books about the state of the nation, and our prospects, ...
STENT
Post-election communication ...
The long haul
My husband Pat says this all sounds like an extended metaphor for my illness, but ...
Rainbow Nation
Mrs Lightfoot is not what you might call a digitigrade creature, daintily walking on its ...
Goede Hoop Cabernet Sauvignon 1997
...
BARRY TANNENBAUM TAKES S.A. MILLIONAIRES FOR A R2 BILLION PONZI IN THE PARK
On Friday last week Johannesburg businessman Christopher Leppan brought an urgent application before the Johnnesburg ...