As I’ve aged I’ve come to suspect that the very concept of technological progress is grossly overrated. The other day my step-daughter’s boyfriend had a pizza delivered to her doorstep. The time from order to delivery was about thirty minutes. Nothing remarkable – except that he was in Honolulu, Hawaii, and she was in Elizabethtown, Kentucky. He simply placed the order online and paid with a debit card. Ain’t romance grand these days? 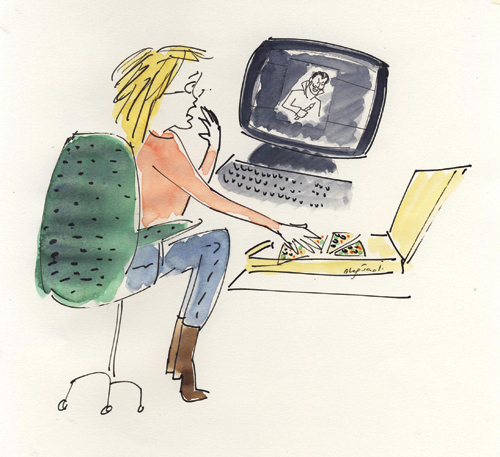 As an internet veteran, I remember the good old days when the internet was accessed only through dial-up. The modem would fire up with a symphony of clicks, hums and orchestrated static until contact with the outer realm was established. Web pages would load slowly but surely. I called it the “world-wide wait”. I didn’t mind. I was exploring cyberspace and that world became my oyster.

But over the years I have come to the conclusion that the computer, rather than being innovative, is actually more of a replacement for the old and familiar. What’s so special about ordering a pizza, anyway? Put simply, my computer is now my typewriter, my pen and my paper. Of course it’s also my phone, mail service, shopping mall, notebook, diary, radio and, as I’ll get to later, my television. One can even earn university degrees online. I’ve felt no need to try that out. But I have been tempted to become an officially ordained minister via the “World Christianship Ministries” site (www.ordination.com/index.htm). The only thing holding me back is my indecision concerning whether I should pay $58 for the basic ordination package, or $225 for the deluxe version that includes a pastoral counsellor certificate, a church charter and an “honorary” doctorate of divinity (www.ordination.com/bmpapplications.html). Choices, choices. Such “degrees” have been available via correspondence for decades. Now you can get them online. Nothing new here, move along.

I distinctly remember the first movie I ever watched online. It was in 1998, which is about a century ago in internet years. The movie was an out-of-copyright B-grade Hollywood horror called House on Haunted Hill, starring Vincent Price (en.wikipedia.org/wiki/House_on_Haunted_Hill).

The image itself was only slightly larger than a postage stamp and heavily pixilated. The audio sounded like it was coming from a goldfish bowl. I enjoyed the experience immensely, despite the telephone bill. Of course I could have been watching a much better picture with much better sound on my television – for free – but the experience of the new technology was exhilarating.

Since broadband became standard here in the US, my favourite TV shows are now available online. Thanks to the high resolution of computer monitors, the quality of the picture often surpasses that of my regular television signal. If I miss a broadcast of My Name is Earl I can watch the episode online at my leisure. I recommend Earl to all those who still imagine the US as anything similar to Hollywood stereotype (www.nbc.com/My_Name_Is_Earl/). The show is probably the best representation ever broadcast of what life is like for the average US citizen. Trust me. I live here.

I can also watch missed episodes of other favourites, like Lost (abc.go.com/primetime/lost/index?pn=index) and The Office (www.nbc.com/The_Office/).

Although South African print and radio sources have long been well represented on the Web, I was recently pleasantly surprised to find an SA television presence on the internet. The SABC provides an archive of “video bulletins” (ww.sabcnews.com/portal/site/SABCNews/) but that’s simply not as much fun as clips from the latest episode of Egoli (beta.mnet.co.za/). Sure, they currently seem to run only five or six minutes from each show, but full episodes are sure to be provided some day. It’s been almost nine years since I was a regular viewer – I’ve got a lot of catching up to do.

Now that’s progress. Would somebody order me a pizza?

Yes, it is progress of a kind, but, puhlleeez – why stilted, old-fashioned Egoli? At least move on to Isidingo. Now there’s a soap to make a South African far from home sob into her pizza box.

The BEE merry-go-round
Nasty accusations of intellectual property theft and hugely inflated tenders are causing ructions in official ...
Dear Editor
Desperate DA   ...
Dear Reader: It's not over
Eight years ago we were the first to identify and describe two factions within the ...
Cockfight at the Reserve Bank
Things are turning ugly at the nation's financial hub, where a dissident shareholder is challenging ...
No corn on the cob
Current crop failures in South Africa are due to the use of genetically engineered seeds ...
Green Point stadium in the red
What will happen when the Fifa circus leaves town? The cost of maintenance alone means ...
Baby Michael
Whistleblower gagged by the system over tragic case of battered child. Sylvia Haywood has been ...
No more sunsets for Milnerton residents
When you’ve paid top prices for stunning views of one of Cape Town’s major attractions ...
Glenrand's no-pay policy
No surprise if some wait a long time for payouts from Glenrand MIB. Commenting on ...
Aluta Continua
The rule of law does not apply to Jacob Zuma or other apparatchiks against whom ...
While America burns
The next phase of the financial meltdown will infect the social and political arenas - ...
Driven to drink
Mathews Phosa’s plea for them to “bly asseblief – Suid Afrika het jou nodig"  (please ...
Grabbing the bull by the horns
An anti-quackery campaigner is back in the ring in his tireless battle against 'pseudo-scientific nonense' ...
South Africa's inhumane death traps
The use of gin-traps by farmers is causing the indiscriminate and cruel killing of animals ...
Communism, immortality and pizza
Since broadband has become the standard here, all my favourite TV shows are available online. ...
Dunnit?
One day lightning struck the burglar-bars and flung Uncle Julius to the carpet and reversed ...
STENT
Here comes a bumpy ride ...
6 bottles of Galleon & 6 bottles of Blyde
...