[This is a detail box attached to a longer story in the same issue, titled "Merlin the Magician at the Temple Beautiful."]

THE COMTE de Saint-Germain died in 1784, but various followers of the occult believe he is still alive, and have adopted him as a model figure or even as a powerful deity. There were rumours of him alive in Paris in 1835, in Milan in 1867, and in Egypt during Napoleon’s campaign. Theosophist CW Leadbeater claimed to have met him in Rome in 1926. In rec 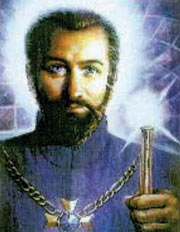 ent years several people have claimed to be the Count of St Germain.

Theosophist Guy Ballard claimed that St Germain had introduced him to visitors from Venus, and published a book series about his channelings. Ballard founded “I Am”.

In Guy Ballard’s Godfre Ray King and Law of Life books, it is said that St Germain’s previous incarnations included Joseph, foster father of Jesus, Merlin the magician, Roger Bacon, Christopher Columbus, Francis Bacon and Prince Rakoczy of Transylvania. (These beliefs are also promulgated by the Church Universal and Triumphant, which believes that St Germain’s past lives also embraced the Prophet Samuel, Saint Alban and a high priest of white magic in Atlantis.)

Ballard claimed that his book The Magic Presence was channelled to him from St Germain. (The official I Am edition is printed in a violet typeface on lavender paper.)

As an “Ascended Master” of the occult, St Germain is believed to have many magical powers, such as the ability to teleport, levitate, walk through walls, influence people telepathically, etc.

A prince's ransom
When Swazi royal Dumisa Dlamini rode into Nelspruit with R600m to burn, the local boere ...
Letters: Dear Editor
Fun and Hilary-ty Can't get enough Blattered by Fifa Absa-lutely ...
Dear reader
A red-light bank ...
Voyages of Discovery
Millions, belonging to FirstRand's Discovery Group directors, made an "extremely unusual" whistle-stop trip to a ...
Protector big nobs stole R50m for Glenrand
Honest guv ... we don't know how it got there, say Mansfield and Harpur. ...
Numbers game
A bonus: Glenrand could plead ignorance and good faith - and, with a bit of ...
Port Elizabeth's designer slums
An Irish developer has discovered that there's money to be made from leaving listed buildings ...
The dramatis personae
The cast in our grand tale of highway robbery, in order of appearance: ...
Sakkie Die Israeliet vs The Highway Lawyers
Who will go down, and who will be kicked as they fall? ...
Murder or framed by a bent cop?
Nine years into a 30-year prison sentence, Jimmy De Lange still insists he is innocent. ...
Merlin the Magician live at the Temple Beautiful
A large ego accompanied by a theatrical speech, and a touch sinister, is Shawna Westcott's ...
The Comte de Saint-Germain
THE COMTE de Saint-Germain died in 1784, but various followers of the occult believe he ...
Don't hold your breath for Virgin Active gym
Fix your premiums for two years   ...
Eating all the way to the bank
PANIC! As we cram ourselves into the tiny wooden lift that used to ferry Standard ...
Making conservation
If Earth was invaded by aliens that killed off most of the humans I think ...
Lifting the lid
We do not sufficiently understand such things as how screwcaps (the most touted alternative to ...
We're all addicts
The tree was much older than Kurt Vonnegut. I mourned them both. ...
No longer performing
If a car is indeed a penile extension, the Hummer's the porn star of the ...
Bewaarder
I strip off and get under the shower, furiously scheming how to get at this ...