Wait till you hear the Bezos plan to save humanity

According to The Washington Post, Jeff Bezos has come down from space and reported that his flight emphasizes his ultimate goal: space exploration to move heavy industry to space and keep the Earth for residents and “light industry”. 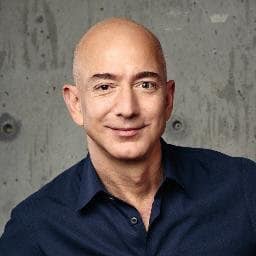 “What we need to do is build a road to space so that future generations can take all heavy industry and polluting industry on Earth and move it up into space. So that we can keep this gem of a planet as it is, instead of ruining it, which unfortunately we might do,” he told the Post.

I knew it! Outsourcing would be the answer because it’s been a real boon here on tired old Earth. We tried it in Mexico – worked like a charm. Then Asia…also a winner.

But now we are out of suitable third world countries to pollute and exploit. [Maybe there’s still space in Africa? – Ed.]

While we continue burning fossil fuels (which happen to power rocket ships!)   we need to move all that dirty stuff somewhere else, pretty quick, so that we can continue to exist here on earth.

Like outsourcing plastic into the ocean, which we’ve already been doing successfully for decades in the Great Pacific Garbage Patch.

We’ll use Mars and the Moon and wherever else we can get to as industrial wastelands and landfills.

This coverage comes from the newspaper Jeff Bezos owns. But the New York Times also gave us the scoop about his “best day ever”.

If you aren’t already annoyed by this self-indulgent use of mega-funds, maybe the fact that he thanked Amazon customers and his employees for paying for his spaceflight might wake you up.

You are being taxed to send Bezos to space.

While he pays virtually zero taxes.

It’s a lot easier to get rich when you pay zero taxes, I guess. I wouldn’t know – I’ve been forking over my fair share since I took my first job at 15.

But wait, your US government taxes don’t pay for his space program, right? Well, in a sense, they do. Because his non-payment of taxes means the rest of us have to pay more.

The Internal Revenue Service is currently investigating the leaked tax returns of both Bezos and that other space cowboy wannabe, Elon Musk.

There’s another way we could save the planet besides delusional plans for outsourcing our garbage to space, but it wouldn’t work out as well for Jeff. That would be to agree that massive amounts of wealth aren’t good for individuals.

Neither is celebrity, cocaine, being a child actor, too much rock-n-roll, or sorcery.

Or, we could try acknowledging a few simple facts.

Fact 1: There are too many people on the planet.

Go forth and multiply is the creed of millions of people.

Fact 2: We are overusing resources. Too many wealthy people in developed countries are free to own multiple cars and homes, while most people in those same countries can’t afford basic transportation or homeownership.

Solution: Suck all the wealth to the top and turn most first-worlders back into third-worlders. This is already underway.

Fact 3:  The billionaire class will rule and will monetize health care, water, property, shelter, and all the other basics.

Solution: Taxing the rich. Or eating them. Both work.

This is super easy, but since most world leaders and billionaires are men, and most corporations are run by men, progress is glacially slow.

Fact 5: The billionaires won’t save us because they are self-serving (just like the rest of us). Only unity of purpose for the greater good will save us.

Unity of purpose can only be achieved when we face a common threat e.g. World Wars I and II. Apparently, COVID isn’t enough.

Perhaps global warming will bring us together – when it's too late.

After reviewing the facts, I now see the Bezos plan is just as good as any other. But I won’t take him seriously until he pays his taxes. Just like I have to.  – Jean Campbell

Dear Reader:Change is in the air
As of this issue, there will sadly no longer be a print edition of Noseweek ...
Dear Editor
“Noseweek’s extraordinary attack” on News24’s journalism and the victims of sexual abuse Adriaan Basson, editor in ...
Retraction and Apology
The defamation action successfully brought by Leonard Katz against Martin Welz and Chaucer Publications ...
Poisoned
Patient given ‘rat poison’ in Netcare hospital dies. Hospital denies liability. Eighty-three-year-old Bernard Katz who died ...
Heads or tails? Two sides of the coin
UPSIDE: Oil find in the fabled Okavango delta Namibia has every right to celebrate. It has ...
Julian Assange: Going nowhere slowly
Worldwide protests as US Government is allowed to appeal UK court’s ruling refusing his extradition ...
Facing prison for fighting Chevron
Rights attorney Steven Donziger (pictured here) pays price for defending indigenous in Ecuador poisoned by ...
Bribery for Africa: 1
Meet Dan Gertler (who denies all wrongdoing). Joining the dots: Court records in Geneva, New ...
Bribery for Africa: 2
Dan Gertler's dealings with Ivan Glasenberg and Glencore Born in SA and a Wits  graduate, Ivan ...
Bribery for Africa: 3
Glencore and Gertler in the Paradise Papers Glencore and Gertler’s dealings in the DRC (here ...
Bribery for Africa: 4
Wikipedia on Sexwale and Guinea In June 2012 Business Insider reported that former ANC cabinet ...
Bribery for Africa: 5
he Mail & Guardian takes up the story in 2016: In New York in September 2016, ...
KwaSizabantu:Chapter Two
Where did the story come from – and where did the money go? Last year, in ...
Canaan Ndlovu
Canaan Moggen Ndlovu, alias Moses Ndlela, arrived at KwaSizabantu Mission in 2015. The 35-year ...
Space cowboy admits Human Life might cease
Wait till you hear the Bezos plan to save humanity According to The Washington Post, Jeff ...
A street by any other name would be sweeter
There have been controversies about current renaming of towns and roads – but quite ...
An irreverent history of corruption in SA from VOC to ANC
Matthew Blackman and Nick Dall have whipped together a wonderful history of South Africa ...
The restaurant of rational choices
You are occupying a hospital bed when others should be using it. You cannot ...
Classified ads #251 September 2021
Smalls ads must be booked and paid for online. Book at:  www.noseweek.co.za HOLIDAY ACCOMMODATION Klein Bosheuwel Bishopscourt, ...