A childhood made up - Living with my mother's madness

Brent Meersman is a journalist and chairman of the Cape Town Press Club. Who would have thought he would write a book, A Childhood Made Up – Living with my mother’s madness, that is not just a remarkable and moving childhood autobiography – it is a beautiful work of art, a rare phenomenon in South African literature.

Noseweek is honoured to be able to republish the first chapter. Read it and I do not doubt you will be devouring the rest of the book as soon as you can lay your hands on it. – Martin Welz

I was two years old when the earthquake of 1969 shook mother earth beneath me with such a force it woke me in my cot. I’ve subsequently read that the seismic wave was six point five on the Richter scale. There hadn’t been an earthquake in the Western Cape since 1809 and there hasn’t been one since, but my mother lived in dread of earthquakes from then on, often detecting ominous tremors in the earth. She was also convinced it was only a matter of time before a tidal wave would wash Cape Town out to sea.

“There was an eerie rumbling that built into a crescendo – a shuddering roar,” my mother recalled. “The whole building was shaking; the paintings went skew; bottles danced on the table. We grabbed you and all of us ran out into the street.

“Most kids would have started howling their little heads off – ripped from their cots like that in the middle of the night. But you were looking around, staring at all of us standing there – on the street in our nightclothes – looking at us with your shining brown eyes… And then you gave us all the most radiant smile. You were like a little angel, assuring us that all was well, and we’d all be all right. I kissed you on the cheek and suddenly I felt very calm.”

I remembered the neighbour across the road; he ran out into the street stark naked. His wife screamed at him and chased him back into the house, which, for all anyone knew at that stage, might well have been a death trap about to tumble down. But he went back in.

“How could you possibly remember that?” Mom said. “You were far too young.” She was obviously alarmed, for what else did I remember? Perhaps it was a memory planted by her telling me the story before, but I could tell she was slightly shocked by how much I did recall, and a bit afraid when I dared to mention things that had happened in our home, when I braved the silence that often enveloped us, hinting at the unspeakable. 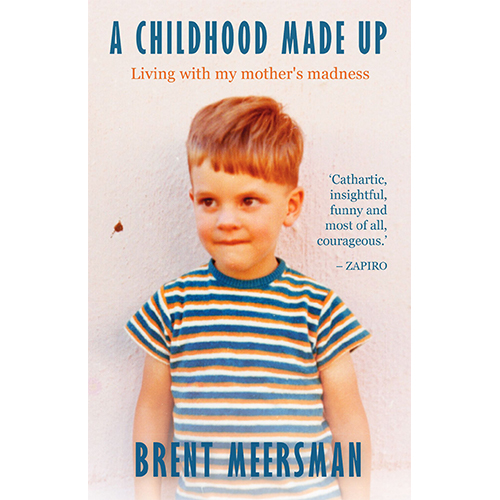 As a kid, I don’t think I ever overheard anything I wasn’t meant to, because things of such a nature were never discussed at home. I remembered how, when I was a small child supposed to be asleep, my mother would slip into bed behind me and hold me. She would be trembling. She couldn’t hide it no matter how young I was. “Go to sleep, go to sleep,” she’d say, as if that would save us.

I remember her saying she saw a dazzling, golden light, like an aura, shining around my head. I clearly recall seeing her in the dead of night standing next to the refrigerator with a carving knife in her hand, ready to stab. She said she did not remember that.

There were other things she would rather forget but which I remembered. And then somehow, as I grew up, I forgot. I forgot almost all of it. Strange, isn’t it, that one forgets one’s childhood and yet it never leaves one?

It was painful and funny when I started to remember again, my memory jogged by going to a psychotherapist for the first time as I approached the milestone age of fifty. At first there wasn’t much order to my recollections – fleeting images I couldn’t connect to episodes in my past: the glare of a fridge opened at night; smells of tins filled with ash; the metallic taste of a small blue pill. I recalled the softness of my sky-blue blanket, the one I hid beneath as a child and found hard to leave behind as I grew up.

What I had experienced as a child was coming back to me: unveiled memories that would stop me in mid-conversation or surprise me while I might be out walking in the midday sun. It was like falling asleep under a giant tree somewhere out in the veld and then waking up to find yourself overrun by biting ants. My body remembered what my mind had forgotten; memories that made me burst out laughing and others that put me on the edge of tears.

Because of these reactions, which were sudden and usually came two days after a session, the therapist began insisting on seeing me twice a week. Our process was classic psychoanalysis – on the couch with my back to her.

I began to recall various traumatic incidents, seemingly unaware that they were traumatic. She would have to stop me: “Wait, wait, wait… please rewind… Did you just say it happened shortly after your father tried to commit suicide?”

“I think we need to pause a bit and talk about that, don’t you?” she’d say, or words to that effect. But I couldn’t remember what I had felt at the time such things happened. There was only numbness; the numbness of turning events into matters of fact. An instinct for survival, perhaps, but I became more preoccupied with trying to understand and empathise with my mother and later my father and still later others around me, rather than to comprehend myself. Compassion is my default. I take a great interest in other people, yet at the same time I can be uncannily absent in their company. It is how I protected myself as a child, always placing a pane of glass between me and them, between stoic Brent and my family. But it wasn’t bullet proof. For I recall how, aged twelve, I started rehearsing for my own suicide. I was still unsure if I wanted to recollect such dark details. I wanted to cling to the fairy tale I had been telling myself and others all these years about my childhood and my family – the story about how my mother was an angel and loved me unconditionally, about how my father was an abused child but broke the pattern and never raised a hand against his own children. It is the tale we tell ourselves about how fortunate we have been compared to so many others, about how our parents’ failings helped us become the unique creatures we are. It is the uplifting story about how thankful we are for the hardships we’ve suffered, because these have given us our rare qualities.

Should I not then have left memory alone and rather stayed content with the childhood I had made up? After all, what my therapist called my “coping mechanisms” were solidly in place. I can with confidence tick nearly every box on any standard list of the characteristics of a psychologically healthy person. There may have been a dark whirlpool at the centre of my upbringing, but I had learned how to paddle.

But it was no use – psychoanalysis had unblocked my memory; my made-up childhood was coming apart. What is repressed must also be heard; the full story was demanding to be told. I had blotted out far too much for far too long.

♦ This extract from A Childhood Made Up – Living with my mother’s madness by Brent Meersman published here with the kind permission of the author and the publisher.