My greatgrandnephew Alex, now, he’s sharp.  Quick of mind and of eye, and if that’s not enough he has also a wry sense of humour.  Of the absurd.  I wouldn’t mind having him around these sombre days, but ag shame, he’s in Australia. That’s where niece and family went when things got just too scary in South Africa, see, and that’s where on holiday I found them, all snug and safe and smiling in Seednee. But ag shame, hey, Alex was away in Canberra.

Nu? I’m off to Canberra on a mighty great Australian bus, and there he is, a youngster employed of all places in the Parliament building. His job is showing visitors around this bombastic 1988 piece of architectural bullshit symbolising access of the common man to democracy and opened by the Queen of Australia who lives in London. Also he gives a brief thumbnail picture of Australian history.

He now gives me the works.  In the forecourt is a long sunken garden, rectangular, a nice fishpond in the middle with lilies and things and down the length of the walls bas-relief panels of Australia’s wild animals.  There they all are as in 1988: kangaroos and cockatoos and wombats and wallabies and emus and schmemus the lot, and right down the line is… is… wait for it… an Abbo. It took a South African to point it out, says Alex.  Point it out to his local MP, who said well it’s all part of history, you know, and one shouldn’t meddle with history, it’s intellectually dishonest. 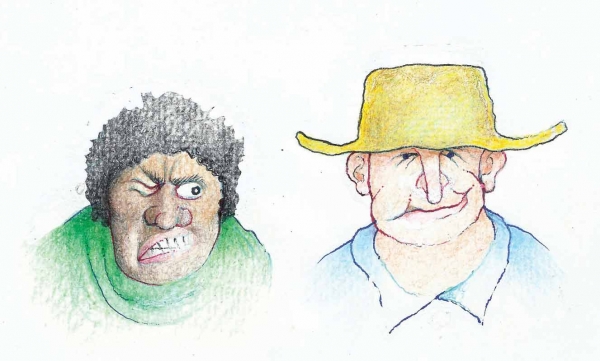 Ja, says Alex, they meddle with history all right when it suits them.  Nobody remembers any more those laws not long ago which said all Aboriginal children of mixed race should be taken from their mothers and transplanted in white communities to grow up white with just a teeny weeny bit of black so over the generations they would be entirely Caucasian.  Bleach out the blackness.  Fuck ’em white, people said.

But where are the Aboriginals? say I to Alex. The First Nation people? I have been here seven weeks and not seen one. No, says he, you’d have to go to the back blocks or the slums, and there’s not a great number of them left; but los all that, it’ll only make you depressed, man.  Come inside and look around.

Inside is architecturally modernistical and moralistical as befits Australian sensibilities, with appropriate displays. Over here is a most artistical big diorama of Gallipoli in World War One, where 8,141 Australian soldiers died most nobly in defence of their King who lived in London. Ummm… say I, Gallipoli is in Turkey, isn’t it? Ja, says Alex, but Germany was a threat to the King’s Empire and Turkey’s Empire likewise was a threat and so logically Turkey and Germany were allies and a threat to Australia on the opposite side of the Earth and that’s why young men here should sacrifice their lives for their King who lived in London.

All the above was ten years ago – maybe twelve but all is clear in my mind.  Nowadays I am able to grasp what’s going on.  Well, excepting one little thing, that is; how does a South Pacific nation come to be part of a North Atlantic armed force in unlawful military occupation of a sovereign country in the middle of Asia? I mean what about Operation Slipper from 2001 to 2014 when 26,000 Australian troops were stationed in Afghanistan, 261 were injured and 41 killed for their Queen who lives in London?

All the above I give to dear readers to mull over. I myself am proper pissed off with the sanctimony of Australian culture: dull, obedient, insolent. Intellectually lazy; especially off-pissing is this image of black African savages butchering innocent Caucasian South African farmers and stealing their lands, a problem never arising for Australian farmers because their savage Caucasian ancestors simply butchered any creature that got in their way. The aboriginal H sapiens came in the same category of nuisance as the Tasmanian tiger.

You see, Australian culture is one of comfortable submission. There is no confrontation with imperialism.  And confrontation is what gives South African culture its vigour. For sure, the victory over Apartheid was a monumental triumph after such a bitter struggle, but what really happened was that we’d got statutory racism out of the way so that the struggle for true liberation could begin: coming to grips with our imperial past, including state capturing by a gent name of C. Rhodes.   You don’t have to be a Marxist to see that what we need is a redistribution of wealth, and a more just system of land occupation is an obvious start.

We are not a complacent people.