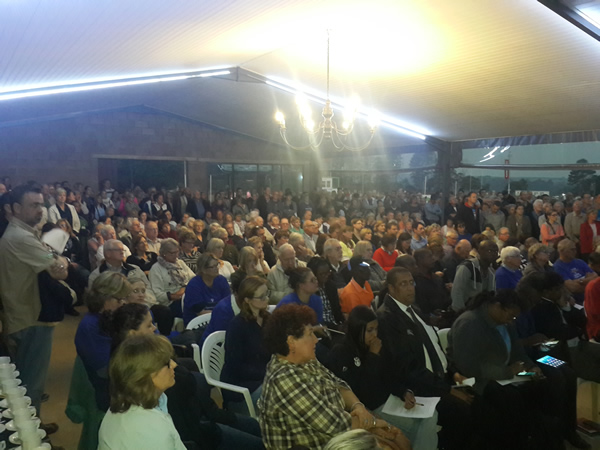 A Department of Environmental Affairs’ (DEA) top official had to shut-down a monitoring committee meeting on Wednesday night as hundreds of residents affected by the toxic stink from EnviroServ’s infamous Shongweni landfill grew increasingly more aggressive, insisting that they were being fed “the same old shit, the same old lies”, by the waste management giant.

And in a bizarre twist, the facilitator of the meeting – a long time EnviroServ contractor – was accused of playing the race card when he insisted that representation from black communities affected by the stench was not enough to justify commencement of the meeting.

A  monitoring committee is a legal requirement in terms of EnviroServ’s (and other waste sites) waste management licence and must comprise community stakeholders including the company, local, provincial and national government and community representatives. It is expected to provide transparent oversight of the hazardous waste landfill.

But residents have long accused EnviroServ of weighing the scales in its favour during monitoring committee meetings by utilising the same chairman for 20 years, only producing information it deems relevant to committee members and ignoring other requests.

Wednesday night’s meeting was a continuation of a monitoring committee meeting that took place earlier in the month. That meeting ended with the Upper Highway Air Non-profit (UHA) and community members expressing unhappiness with EnviroServ’s toxicology report – which the company says exonerates it from any illnesses thought to be from the malodour - after it was revealed it had not been subjected to peer review. That process is now alleged to be underway.

Two items were on the agenda for Wednesday – amending the monitoring committee’s original terms of reference to include broader voting rights for all communities affected by the malodour and voting in a new chairman – a position held by long-time EnviroServ contractor Pravin Amar Singh.

Multiple residents have told Noseweek they deem Singh “illegitimate”, “ineffective”, “untrustworthy” and “a liar, like the people who pay him”.

Citing the hundreds of residents present at the meeting, Singh tried to pronounce it a public meeting instead of a bona fide monitoring committee meeting, but the DEA’s deputy director-general for chemicals and waste management, Mark Gordon, brushed that aside by announcing the meeting was a “legal” one and would be “minuted and documented within the files of government”.

The meeting started within an understandably tense atmosphere but soon deteriorated into a screaming match as some community members (again) accused Singh of partisan behaviour and stalling.

The terms of reference and Singh’s chairmanship were never fully addressed as Singh lost control of the meeting several times because of volleying back and forth between emotive and sometimes misinformed questions, something he was not known for entertaining at previous meetings.

It was only when Gordon took the microphone and insisted that the terms of reference and chairmanship were “immediately” addressed that focus returned.

That focus quickly ended within minutes of Singh again taking the reins, with calm only returning as Gordon again took the reigns.

And so the volleying continued until events took a bizarre and, if a renowned environmentalist is to be believed, deliberately racial turn when Singh announced there was not ample representation by black community members and voting should not commence. This took place after monitoring committee member Dumisani Mkhize, representing his environmental organisation, said that not enough black representation was present and the meeting should be postponed.

“What we are doing now is we are dividing communities on areas and interests and the worst is actually race,” said Singh, to loud and prolonged boos from the crowd. “The African communities, they don’t have representation,” he said.

Of course, as the facilitator, it was up to Singh to ensure all residents – black and white - were timeously aware of the meeting, something he failed to do.

Noseweek readers will remember that black residents have accused the company of ignoring their pleas to investigate the stink and its alleged health impacts for up to 15 years. The company has also ignored – according to some residents from the black community – pleas for investigations into the death of livestock that allegedly drink from streams contaminated with EnviroServ’s liquid runoff.

Some black community members have also declared, in public meetings, EnviroServ’s attempts to placate them with social investment programmes “and soccer matches” instead of addressing their health concerns. All of this took place while Singh was chairman of the monitoring committee – where black residents also say they have not been adequately represented under his watch.

This was not lost on the angry crowd, which hammered Singh for not making the minutes of the previous meeting available, not delivering documentation to outlying areas and not providing documentation in isiZulu. Singh has promised to do all of these things since Noseweek started attending monitoring committee meetings and has failed to deliver on any of them. Noseweek has heard Singh promise to “personally deliver by hand” any necessary documentation to communities in outlying areas and has failed to do so.

Environmentalist Desmond D’Sa, who was present at the meeting, told Noseweek that Singh was “biased” and “a racist divider” who should never be allowed to chair another meeting. “I was sickened by his racist attitude,” said D’Sa.

“Pravin Singh is paid by EnviroServ and likes to pretend he is with the black community because the aim and objective is to keep the landfill going and extend the site to phase three. People must know that this fight is not going to end. We must fight strongly now,” he said.

“EnviroServ is now going to play this as a black and white issue,” said D’Sa, who added he had seen the “tactic” being employed by waste management companies before. According to him, the companies tried to lobby community members to their cause by primarily using the fear of job losses as a motivating factor.

“Waste companies have a history of violence against people who speak out and they have a history of buying people,” said D’Sa. “The community is agitated by being told people with health concerns are looking to take away jobs by closing landfills.” D’Sa said he had experienced this at another landfill in the province and had had his life threatened.

Another community member at the meeting, who worked in KwaNdengezi, spoke openly of EnviroServ “sticking their nose in every little community meeting” in the area and telling residents there was no problem and nothing to worry about. Singh and EnviroServ senior management did not address the allegations, with Singh instead bolting to another question as the crowd heckled and laughed at him.

Gordon said the issue of black representation was not being ignored, which was why the department asked that a list of affected organisations and areas – not individuals - be drawn up at the start of the meeting.

“I am suggesting that even from the black community, people look at this list and tell us who is not represented here by way of community and organisation,” he said. The list was read and it was established that people from all affected communities, including organisations, were present.

Despite this, Singh again said that “representation appears to be an issue and we can’t move forward”. He said the options now included moving on to the terms of reference or postponing the meeting and seeking more consultation.

Shouts of “Who pays you?” were then thrown Singh’s way and Gordon had to again take the microphone, but monitoring committee member Mkhize again brought up the issue of representation and again called for a postponement. Once Mkhize was finished, residents started demanding the microphone to speak. Gordon again tried to explain that even if residents weren’t present, they were still members of the committee because they were affected and voting could take place. Gordon was on a good footing until he mentioned that there was now full transparency around the workings of the landfill.

Gordon eventually closed the meeting after about two-and-a-half hours as tempers continued to flare. He said the terms of reference were to be circulated to all interested and affected parties by next week, after which another monitoring committee meeting would take place. Furious community members were seen streaming out of the venue, with some stopping to scream at Gordon. By this time, Singh had called out some white residents for their “privilege”. [Noseweek wonders if he ponders this privilege while driving his Jeep Wrangler – Ed].

Speaking to Noseweek on Thursday, legal representation for Upper Highway Air, which is representing affecting communities in the civil suit against EnviroServ, said the company’s proposed terms of reference “are an attempt to regularise the illegitimate manner in which the committee has hitherto been conducted, in breach of the current and binding terms of reference.

“This includes the terms that they have the right to appoint and remunerate the facilitator; that they have a right to exclude membership if they believe there is a commercial or competitor conflict of interest and there will only be an ‘endeavour’ to make relevant documentation available to the committee members provided.

“Further that technical and proprietary information may not be released to any third party without EnviroServ’s consent. This would mean the committee members and hence communities would never be able to  secure the type of professional expert input which they have in order to challenge the unreliable information presented to the community and authorities to date and for which EnviroServ is yet to provide an answer.”