The company that distributes millions of state social security grants, has not only the government but all South Africa hanging from a cliff by a proverbial computer cable.

This year Cash Paymaster Services (CPS), a subsidiary of the US-based Net1 Group will distribute R130 billion (close on R11bn a month) to 17 million South Africans (30% of the population) who are dependent on social security for their survival. But on 30 March next year, the company’s contract comes to an end. The Department of Social Development – by way of its division known as the SA Social Security Agency (SASSA) – proposes to take back that mammoth responsibility.

It wasn’t doing the job too well last time – when far fewer people received grants – which is why the job was contracted out to a major cash-distribution company in the first place.

Now, with less than a year to go to D-Day, 1 April 2017, the Department of Social Security still won’t tell anxious opposition MPs exactly how it plans to do the job; it is still “considering options”.

The government’s record at managing state enterprises is not good and the minister in charge of Social Development does not inspire confidence.

If SASSA for any reason is unable to make an instant, smooth takeover, and payments fail to reach the 17 million people dependent on their “survival” grants on time, or at all, the consequences could be dire, if not catastrophic. One third of the population will immediately be without the means to feed themselves. The national crisis would be on the scale of war.

Experts close to the situation (and unconnected to Net1 or its subsidiaries) tell Noseweek that in the time available, the government has only one option. It will have to take over Cash Paymaster’s entire infrastructure, with all its flaws. The snag there is that CPS has already formally indicated (in court papers) that it wants R900 million for its nearly obsolete computers and technology – that is the computer cable by which we are left hanging.

And the relationship between the government and Net1/CPS is not exactly friendly: shortly before Noseweek went to press, SASSA laid criminal charges against CPS and the Net1 group’s banking subsidiary, Grindrod Bank, for allegedly persisting with illegal deductions from grant recipients’ monthly payments. This was after the two companies had written to SASSA saying they refused to stop the deductions as they believed the government had no legal right to forbid the deductions. (More about this issue below.)

The massive social security system pays R53.5bn in grants to three million pensioners; R48bn to 12 million children in need of support (half of them, infants under the age of one year); R20bn to more than one million disabled people; and R5.5bn for the care of 460,000 children in foster homes.

Just for the verification and approval of grant applications, SASSA employs 10,700 people at a cost of R3bn a year. Other costs bring SASSA’s budget up to close on R5bn. (Its annual budget for fraud investigations was recently increased to R83 million.)

To do the actual distribution and payout (by means of a cash-card system), CPS is paid a flat rate of R18 for each grant paid each month, a total of over R300 million a month and R3.6bn over the past year.

But the colossal cash flow of over R10bn each month creates other billion-rand opportunities for profit-hungry financial agencies, such as Net1 and its own banking subsidiary, Grindrod Bank (which has a bank licence but no branch network to speak of). These include transaction and cash-withdrawal fees charged to grant recipients every time they use their card either to make a purchase or to withdraw cash at an ATM. (Grant recipients report that they are only able to use their cards at Bidvest and Nedbank ATMs, suggesting that CPS has struck a financial deal with those banks, causing considerable hardship for the poor and disabled who frequently have to travel long distances to find those sparsely distributed ATMs.)

And, for an astute operator not too concerned with social and moral issues, there are even more profit opportunities. Regulations instituted by Minister of Social Development Bathabile Dlamini disallow any advance deductions from social grants other than for a funeral policy premium (which may not exceed 10% of the grant amount).

Not satisfied with their takings from funeral policies (Net1 had an insurance subsidiary already lined up to market those to all grant recipients), within no time, the clever people at Net1 had devised a way around that restriction.

The Black Sash and a group of diligent DA MPs (all women) who have made it their business to visit rural constituencies to research the subject, have received numerous complaints from grant recipients who say they were coerced and “tricked” into opening bank accounts with EasyPay, another Net1 subsidiary. Funds from SASSA-branded cards are then automatically transferred to the private EasyPay account, to which SASSA has no access and over which it can assert no control.

And it emerges that Net1 has devised an irresistible strategy to lure the poor to its new venture: they are persuaded to sign up with the offer of an instant R1,000 cash loan, repayable over six months (interest rate unspecified). 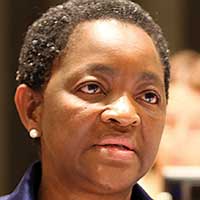 Black Sash declared in a statement issued in May: “Corporates should refrain from interfering with the state’s duty to provide social security to the most vulnerable members of society.”

EasyPay was launched by Net1, the holding company of CPS that distributes grants on behalf of the state, in 2014. According to reports, it managed to sign up between 800,000 and one million clients, mainly rural social grant beneficiaries, within a few months. As Minister Dlamini, too, noted in a statement: “Social grant money in private accounts is game for predatory behaviour, keeping beneficiaries in a debt trap.”

At a press conference called in early May she related with great emotion the tales of suffering told her by poor and elderly women who were dependent for their survival on state social security grants: ever-larger sums were being deducted from the grants, even before they were paid out. Some were receiving as little as 20% of the grant amount.

Dlamini made no mention of the fact that DA MPs Bridget Masango, Elza van Lingen, Karen de Kock and Lindy Wilson had been raising this issue for months already with SASSA, and peppering her with parliamentary questions on the subject.

On field trips visiting their constituencies, these MPs had learnt that numerous deductions were being made: for various types of insurance, for loan repayments, for electricity and cellphone airtime – deductions that frequently totalled half, or more than half  of the total social grant.

In the next issue, Noseweek will  deal with the question: How might the government have addressed all these problems?

STENT
Crisis ...
Dear Editor
Lesson for one and all ♦ Jansen's imperfect opinion ♦ Knott-Craig's odious stance ♦ Incorrect ...
Let them live on R753 a month
Justice Malala’s not-to-be-missed weekly TV show on eNCA ends with his nomination of a Winner ...
UPDATE: Mantashe plays Game of Thrones
Judge John Murphy has granted Princess Wezizwe Sigcau and her mother Queen Regent Lombekiso MaSobhuza ...
SA's impending social grant meltdown
The company that distributes millions of state social security grants, has not only the ...
Destroyed by SARS
Taxman seized his business, sold all his assets and put Jacob Dozetas on trial for ...
Heads roll and bullets fly in KZN
As ANC factions go to war, it’s back to the killing fields of 1990. Three ...
Kangaroo cowboys go wild on the West Coast
Murder and menaces ignored as Oz mining outfit trashes SA environment laws.  Sikhosiphi Bazooka ...
Property moguls continue to fleece Limpopo government
Observers say rich Jimmy the Greek is the Life Honorary Premier of poverty-stricken province. Limpopo ...
Dead Man's Chest
When Johannesburg businessman Imtiaz Mohammed was murdered in 2010, it fell to his widow ...
Bitter battle over multi-million rand estate of Polokwane accountant
Forged signatures and fraud alleged as Hawks and NPA probe disputed will. The late ...
In the mind of the EFF
Ndlozi says Malema is the future. Without education there is no running of a sophisticated modern ...
Lowdown. Down under
The superstorm on Australia’s east coast, which claimed at least six lives and saw ...
Life force. Keep on keeping on
DEGAS' DUST by Carnie Matisonn with Charles Cilliers (Tafelberg) ...
The fires beneath
Monica Wilson, née Hunter, was the most prominent social anthropologist of her day in ...
Land. Eradication before expropriation
As I thought about the above headline and what prompted it – the policy ...
Cookie. Food of love
When I was but fifteen I went walkabout with my best friend Loonybin Bettleham, ...
Classified ads #201 July 2016
FOREIGN HOLIDAY ACCOMMODATION ♦ LOCAL HOLIDAY ACCOMMODATION ♦ LOCAL PROPERTY TO LET ♦ LOCAL PROPERTY ...