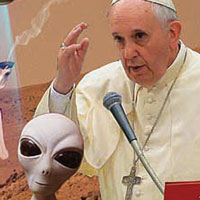 The End of Days or a lot of papal bull? Read all about the Alien Agenda.

He may or may not be the Antichrist, but the Pope will almost certainly be the one to reveal the existence of alien life, embrace and pray for it, baptise it and herald Extra Terrestrials as mankind’s creators and saviours. And it could well happen in the next 12 months.

It’s as exciting as it is scary, but at least the Large Hadron Collider has given us another reference for Switzerland besides overpriced chocolate and Heidi.

Often with a PhD in physics, microbiology, genetics, Semitic languages, Apologetics or economics, individuals on the Fringe have in common a hunger for eschatology.

They are devourers of science, science fiction and global conspiracies; they know Crowley, Blake, Asimov and Lovecraft, and have transferred secular occult fascination to their Christian lives. Their Bible knowledge is astounding, as is their understanding of Hebrew, Aramaic and Greek; they are often adherents of the King James Version because of its textually pure translation.

And then there’s the Vatican Observatory and the LBT Near Infrared Spectroscopic Utility with Camera and Integral Field Unit for Extragalactic Research (LUCIFER) in Arizona.

LUCIFER is touted as belonging to the Vatican Observatory by conspiraphiles, but it is the Max Planck Institute for Extraterrestrial Physics that built and operates it. Both organisations, and others, are part of the consortium of the Mount Graham International Observatory. This falls on deaf ears when a quick Google search will tell conspiraphiles that Brother Guy Consolmagno, a Jesuit (!) and MIT-educated research astronomer, planetary scientist and president of the Vatican Observatory Foundation, is on record as saying he would baptise an alien. 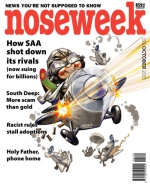