Dear Reader:Saab - why the sudden candour?

In May, Swedish defence supplier, Saab was still steadfastly denying that bribes had been paid to secure its contract to supply 28 JAS Gripen fighters to the South African Air Force – just one component of the massively corrupt arms deals concluded by the Mbeki government in 1999.

Then, suddenly, in June, Saab admitted that R24 million had been paid by its South African subsidiary, Sanip, in “bonuses and salaries” between 2003 and 2005 to advance the deal. But Saab president and chief executive Haakan Bushke still denied responsibility, saying in a statement: “A person employed by BAE Systems [Saab’s British partner in the deal] has, without Saab’s knowledge, signed for us an unknown contract… signed us up [for] until now unknown transactions”. 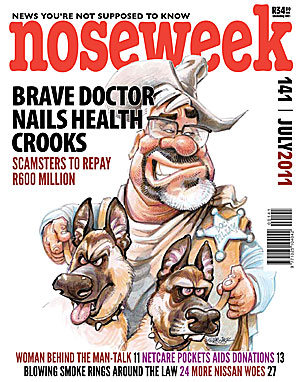 Why the sudden turnabout? The most obvious reason was that Sweden’s TV4 television channel said it had evidence that Saab had promised to pay South African defence consultant Fana Hlongwane, who also served as a consultant to the Swedish firm, millions of euros in bonuses if Pretoria did not back out of the Gripen deal.

Hlongwane was an adviser to then-Defence Minister Joe Modise at the time of the arms deal.

(You might recall that the erstwhile Scorpions, acting on a request  from the UK’s Serious Fraud Office, raided Hlongwane’s Joburg home and his Zimbali Estate in KwaZuluNatal in 2008 in search of documentation related to the arms deals.)

But there are other, more persuasive reasons why Saab now might just be willing to come clean: for a start, Saab’s confession follows the announcement by the Hawks that they had closed their investigation into the arms deal. (The DA has called on Parliament to summon the head of the Hawks, Anwa Dramat, to explain the decision to close the remaining two legs of the investigation. The Hawks are yet to appear before MPs to explain the closing down of the probe, despite repeated requests from the standing committee on public accounts. Meanwhile the government is rushing ahead to get the Protection of Information Bill passed by Parliament. Guess why!)

In Britain, not long before, the prosecuting authorities concluded a deal with BAE that ensures nothing more will be said – or done – by UK authorities about bribes paid by BAE in South Africa – and elsewhere.

An even better reason for Saab's sudden candour: just one week before the dramatic confession by Saab, BAE Systems announced it had sold its stake in Saab for £152m (R1.7 billion), marking the end of a 16-year-long relationship between the two defence contractors.

The relationship had already started going chilly in 2005, when BAE reduced its 35% stake in Saab to 21% – and started promoting the Eurofighter, a direct competitor to the Gripen. (BAE was increasing its focus on the US market. It is now among the top 10 defence firms operating there.)

BAE has been very seriously implicated in wrongdoing in the last decade and has recently paid a number of plea-bargained fines amounting to nearly $500m.

This has seriously damaged Saab’s prospects, especially in its bids to sell the Gripen. Even Norway, which invested in its development, dumped the Gripen in favour of the Lockheed Martin F-35 (which arms-deal critic Richard Young describes as “in any case more modern, more capable and less expensive”).

Saab can still sell the Gripen to “second world” countries, but even there it will be helpful if it can pass the blame for past corrupt payments on to a competitor. BAE is clearly not only the correct culprit to blame, but perfectly placed in space and time, seen from Saab's perspective, to collect the blame.

Whoever doubted that the arms dealers have the world’s politicians in their pockets – our own President Zuma taking pride of place among them.

And then of course, there are the bankers. Pop into the nearest reputable DVD-hire shop and take out Inside Job, a feature-length documentary narrated by Matt Damon, in which all is revealed about the Icelandic bank collapse, and President Obama’s multi-billion-dollar bailout of some of the world’s most disreputable bankers –with taxpayers’ money.

When you are totally depressed, take heart: clearly the arrival of WikiLeaks – and Anonymous – could not have been better timed. God knows, we need them! Turn to Alien Life in this issue to understand why.

For a bit of local solace,  turn to our cover story High Noon for Health Scamsters and the portrait of a miraculous woman Motherwell's one-woman powerhouse to rediscover that brave individuals can and still do make an enormous difference for good – yes, even men and women in government service!